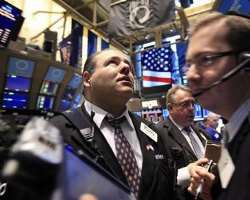 World shares touched their highest level in a week on Friday and bonds and oil rose after U.S. central bankers moved to ease fears of an early withdrawal of monetary stimulus.

Upbeat data from Japan, which helped Tokyo's Nikkei index .N225 end the first half of the year up 31.5 percent, and improving credit conditions in China added to the better investor sentiment.

Gold plumbed fresh three-year lows below $1,200 an ounce, leaving it on course for its worst quarterly performance since 1968 as the Federal Reserve's plan to taper its bond buying strips the metal of its appeal as a hedge against inflation.

Traders said the day's market activity was likely to be dominated by last-minute position adjustments at the end of what has been a volatile period for many investors as the era of easy money draws to an end.

"It's been a tough quarter, the easy game is up and markets have to revaluate where they stand," Wouter Sturkenboom, Investment Strategist at Russell Investments, said.

The end-of-quarter maneuvering was cited behind a rise in the euro off a four-week low against the dollar to $1.3045, and was expected to cap moves in European shares.

The broad FTSE Eurofirst 300 index .FTEU3 opened 0.1 percent higher for a third day of gains, though it is on course to end June lower after a record 12 monthly rises.

European bonds shared in the more positive tone, with yields falling on core German debt and on riskier Spanish and Italian paper.

Earlier, MSCI's broadest index of Asia-Pacific shares outside Japan .MIAPJ0000PUS climbed 1.4 percent, pulling further away from an 11-month low and wiping out this week's losses. It was still down around 7 percent for the year.

Brent crude oil futures gained from the better tone towards riskier assets to climb 29 cents to $103.11 on the way to their the first monthly rise in five months.