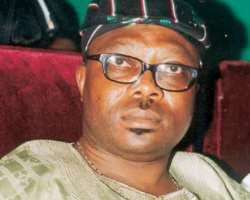 
Even in his absence at the campaign tour, Osun indigenes last week trooped out in their thousands to support the 2014 governorship aspiration of Senator Iyilola Omisore.

Cross sections of residents who spoke to our correspondent said they are tired of the docile leadership of the present administration in the state even as they vowed to support Omisore's election.

A resident of Ikire in Irewole local government, Isiaka said it was unfortunate that the state has not witnessed any developmental progress since Ogbeni Aregbesola came on board as governor of the state.  Others said Aregbesola is the worst governor they have ever witnessed in the state stressing that even 3 years into the life of the administration; they cannot point to any achievements of the governor.

They also expressed displeasure over the introduction of the controversial Opon Ifa in schools in the state in which they described as a retrogressive policy. The people also complained about heavy debts, increase in poverty, lack of transparency in governance as well as domination of Lagos contractors in the state.

Our correspondent reports that Osun residents are essentially yearning for a change even as they stressed that Senator Omisore stands tall from the pack and Contrary to earlier belief; Omisore has a strong presence in osun political grassroots as evidenced by recent tour of the councils by his supporters.

The tour is a sensitization rally across the 30 local governments of the state to drum support for the gubernatorial aspiration of Senator Iyilola Omisore.