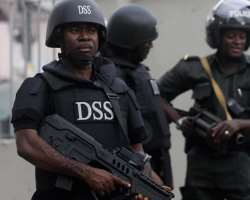 
Fawaz and the two Lebanese were arrested in connection with the Hezbollah armoury uncovered in an underground bunker in a building in Kano recently. Some other suspects are still at large.


The suspects had dragged the Federal Government to court, challenging their detention and demanding N1billion as compensation for general damages consequent upon which Justice Ademola ordered that they be produced in court on Thursday, June 13.


But when their application came up for hearing on Thursday, the SSS, in a counter affidavit deposed to by Mr. Terseer Ayaka, an SSS official, told the court that the case for which the suspects were being charged had assumed an international dimension as he argued that releasing them would be against national security.


He added that the SSS had further established a much more serious terrorism offences against them, stressing that some of the suspects were still at large and a premature release of those in detention could compromise the investigation.


The SSS also disclosed that a preliminary case file had been opened and forwarded to the Attorney General of the Federation for legal advice.


It also stated that upon his arrest, Fawaz's, (the second applicant) residence at Wonderland Amusement Park and 58 Ademola Street in Abuja were dully searched and prohibited firearms and other incriminating items were discovered. The recovered items were marked Exhibit 1 and 1a-d respectively.

The deponent further stated that further investigation led to the arrest of Abdullah on May 12 at the Mallam Aminu Kano International Airport Kano on his way to Egypt en-route Lebanon. He was said to be in possession 61,170 United States Dollars, which he allegedly did not declare.