Jose Mourinho: Chelsea Boss Says 'Call Me The Happy One' 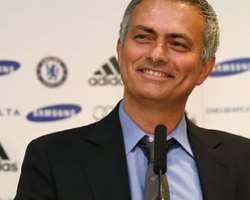 Jose Mourinho proclaimed that he is "the Happy One" on his return to Chelsea, adding that he is calmer and a better manager than he has ever been.

The 50-year-old Portuguese, who first managed the Blues between 2004 and 2007, was officially announced as Chelsea's new boss on 3 June.

"I am the Happy One," said Mourinho at a Stamford Bridge news conference.

"Calmer? I believe so. I'm in the best moment of my career in terms of knowledge."

He added: "I began management in 2000. I thought I knew everything, but after 13 years you realise you know nothing and have to learn every day. My adventures around Europe were fantastic for me, different countries, different cultures, different media. It was fantastic.

Former Real Madrid boss Mourinho, who replaces Rafael Benitez at Stamford Bridge, has signed a four-year deal and said he wants to stay for the entire term.

"I hope I can go to the last day of the contract. If the club is happy and the club wants me to stay then I'll be more than happy to stay."

When asked whether he was disappointed that neither Manchester United nor Manchester City had approached him about their managerial vacancies, he said: "I am where I want to be - I wouldn't change it for anything."

The former Porto and Inter Milan boss helped Chelsea win five major trophies during his first spell at the club - two Premier League titles, two League Cups and an FA Cup. He believes he can emulate that achievement.

"I want to believe it is possible - I always trust my work," added Mourinho.

"I know many people who belong to the club and I know the type of mentality and ambition people have.

"My career has been built and raised on success. I was able to achieve success and win trophies and leave different types of legacies at every club. I have to believe in that."

When Mourinho left the Blues in 2007 it came as a surprise to many, although it was widely reported that his relationship with owner Roman Abramovich had become strained.

But the Portuguese boss stressed on Monday: "That is not true.

"I read and keep reading that I was fired and we had a complete breakdown in relationship. At the time we thought it was the best for both of us [to go our separate ways].

"It was a decision that was difficult for both of us, but a decision made by mutual agreement. There was never a breakdown of the relationship and that is why it is possible for me to be here today.

"I am back because we feel we are in the best moments of our careers, ready to work together again and in much better conditions this time to succeed in what this club wants, which is stability."

Mourinho also stated he wants to make defender John Terry "the best player he can be" again.

The 32-year-old, who was made club captain by Mourinho during his first spell in charge, missed much of last season because of injury and suspension.

Even when Terry was available he was often overlooked by Benitez.

"I won't speak one word about Rafael Benitez's decisions, either on John Terry or any other player," said Mourinho.

"All I can speak about is the future and the future is to meet John on 1 July and try to get the best out of him. I know what he can give, so let's try to make him again the best player he can be."

However, Mourinho insists there will be "no privilege" for his former players, saying: "There are still a few boys from my time but it's important to tell you - not them because they know - that there is no privilege for them. They know my nature. They don't have an advantage in relation to other people."

And he has warned Chelsea fans not to expect several new signings: "We have 60 players I think because there are 20 new buys in the media in the last two days. No - I need to work with the players, not commit injustice, give them a chance, be fair with them.

"After that we'll have time to make decisions. A couple of signings is normal, correct practice in every club, but I want to see the players I have."

Mourinho arrives at Chelsea after a turbulent three-year term at Real Madrid, where it was reported that he fell out with some players, notably goalkeeper Iker Casillas, and irritated the media by not appearing at news conferences.

However, he gave a caustic response when reminded of Barcelona midfielder Andres Iniesta's suggestion that he "damaged" Spanish football.

"I damaged Spanish football by being the manager that broke Barcelona dominance.

Before moving to the Bernabeu, Mourinho won the Champions League and Italian league title at Inter Milan.