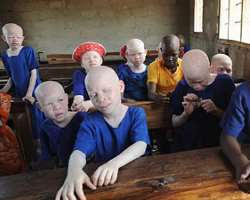 
NO human being must be rejected by any man due to any known or unknown reason as they are human beings just like you and I.

Governor Emmanuel Uduaghan of Delta State made the remark at the flag off of the sensitization/enlightenment campaign on Albinism at Wesley University of Science and Technology, Ondo, saying albinos can never and should not be denied their rightful place in the society.

Governor Uduaghan said he was saddened about a week ago after watching an Aljazeera programme which showed a deplorable and despicable documentary on the plight of Albinos in Kenya and Tanzania, lamenting that as a medical doctor who should know better, he was indeed saddened.

Represented by Dr. Rukevwe Ugwumba, Special Adviser on Health Monitoring, the Governor said: 'There are Albinos among us and we should not deny the fact. It is a fact. What we should not do is to deny them their rightful place in the society. That I am here today is significant. Because we are being proactive now, the Ministries of Health, Women Affairs and Culture and Tourism, including Information, are now coordinating to ensure that albinism matters are handled with efficiency and care.'

Continuing, he asked 'Why take a medical and natural condition to mean another thing? This dastardly act unfortunately implies that God sorted some of us to be different in hierarchal order. This is false as skin colour, doesn’t depict superiority or give anyone the right to do harm. Each one of us is peculiar and uniquely made.'

Earlier, Miss Adesuwa Ero, the Coordinator, a youth corper undergoing her National assignment, said she already knows at her age what it feels like to suffer discrimination for a reason which is no fault of hers, which doesn’t at all alter her at all as a human being, one like any other.

She said as an Albino, she has blossomed to a young and beautiful and for emphasis a very normal woman like any other at her age, because she is normal and she is human, maintaining that 'we are all the same though one  might be more human and in touch and even more intelligent than people like us without Albinism.'