PDP Blasts ACN’s Joe Igbokwe, Says “He Is A Serial Ingrate And Betrayer” 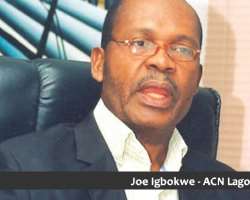 The Lagos State chapter of the PDP has described the unwarranted outburst of the Lagos ACN spokesman, Joe Igbokwe, against the person of Labaran Maku, the Hon. Minister of information, as diversionary, lacking in merit and criminally persuaded.

The party opines that labaran Maku is a genuine patriot, untainted in character and remains the best man for the job at this time unlike “Igbokwe who has always been known to use abusive languages and lies which is not what politics is about

The Lagos ACN spokesman had reacted to the statement of Labaran Maku that lagos state is presently enjoying strong federal Government support that would be showcased during the planned Good Governance Tour.’

It would be racalled that governor Fashola had suddenly made a “U turn” on plans by the Labaran Maku Ministerial team to visit lagos state for the Good Governance Tour. This is inspite the fact that Governor Fashola actually supported the noble idea at the meeting of the Governors.

The idea of the Good Governance Tour is to showcase dividends of democracy in each state, especially as delivered by the Federal and State Governments.

The Lagos State PDP thus states that it has been vindicated that the ACN government in the State is Damn arrogant, non tolerant and hostile to even constructive criticism.

The party wonders whether the unguarded statements against the person of the Hon. Minister of information was in fact the appropriate reaction in the circumstance or for the State Government to showcase the much touted developments in the State.

“It is always characteristic of the ACN leadership in the state to deny the obvious. It is true that Lagos State enjoys monumental federal government presence and support. Amongst many contributions of the federal Government is the lekki-Ikoyi link bridge recently commissioned. It would be remebered that Governor Fashola attributed the successful construction of the bridge to the federal government under late president Musa Yaradua.

One is thus bemused that whilst the Governor cannot deny the great supports of the federal Government to Lagos State, the Lagos State ACN spokesman would always go on a frolic of his own and showcase the attitude of a man suffering from diarrhoea of the mouth. Indeed the huge lagos “tax payers money monthly allocated to the lagos ACN spokesman could make him get over fed like a kid and thus become exuberant in character”
The Lagos State PDP submits that other notable Federal Government monuments that the Lagos state Government has been enjoying and feasting on include the: SeaPorts, Airports, Railways, the third Mainland Bridge, Ikorodu Road, Agege motor Road, popular oshodi “oke” bridge, federal Medical institutions, Cheap Federal Government higher institutions to mention a few.

The Party states emphatically that inspite the over 32Billion Naira monthly IGR and atleast 9Billion monthly Federal Government allocations, the state yet stands as the biggest debtor in the country having collected Local and forein loans of well over 6 trillion Naira.

Notwithstanding the huge sums, the major projects in the state are carried out by concessionaires. Such projects include the lightRail, lekki-epe road, etc.

“For fourteen Years the ACN led government in the state cannot construct the very expedient fourth mainland bridge, even though it had been their point for campaigns at every election.
Indeed, all the bridges in the State connecting the Mainland and the Island are federal Government legacies.

No wonder, the ACN government in the State cannot showcase their own scorecard.

For further sake of clarity, States like Akwa Ibom, Rivers, CrossRivers, Delta, etc have their own independent Power projects, Airports, paying the minimum wage to their workers, built more bridges than lagos without any tolling.

“What then is the Pride of the ACN government in lagos state after fourteen years of only plunging the state into unprecedented sorrows, deprivation and Fascism”

We want to remind the lagos ACN spokesman that only under the ACN administration in the state has his tribesmen businesses been most witch-hunted in the history of the state, whilst he stands criminally silent like a pathological betrayer.

We are also inclined to be concerned about the fast senility that has set into a man that is just in his 50s who for a plate of porridge attempts to distort enshrined lagos history by  describing Governor Fashola Administration as the best ever to happen in the state.

Indeed an unequivocal, sincere admission that the Eight Years of Tinubu administration in the state was a waste.

Notwithstanding, one wonders whether the said spokesman was born at all or was still in his remote village during the administration of pa Lateef Jakande.

The Lagos State PDP reiterates that the Fashola Administration remains a propagandists one that cannot showcase any tangible development that is directly linked to the over Sixteen Trillion Naira it had realised during same period.

“This attitude is one of an Ingrate and betrayer and indeed has become metastised in the ACN leadership.
At this stage in time, we must now sympathise with them.

They must eighter surrender themselves for psychiatric examination or be obliged Seven Days Fervent Prayer Session. Nigerians must take this very seruously”

The Lagos State PDP notes that contrary to the day dreaming by the ACN leadership that lagos state is globally lauded, the state is actually globally noted as being the Second dirtiest in Africa, largest debtor State in Nigeria and One once governed by a perjurer.

It therefore intimates the ACN to accept that it is now terminally diseased and must in a matter of time, surely go into oblivion as a result of modern reality in governance.

“We know that the ACN Government in lagos state is only avoiding the Good Governance Tour in order to cover up its inadequacies.

It is definitely not true that Labaran Maku is seeking any favour. As a matter of conviction, Maku must have rejected to be compromised by governor Fashola.

At this jucture, we can only apologise to the federal government and Labaran Maku on behalf of the Prodigal leadership of Lagos ACN whilst also admonishing them to wake up from their infantile politicking and get Matured.