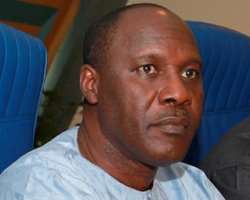 
A statement signed by the Chairman of the PDP, Burutu LGA, Delta State, Pastor Ogeibiri, the Secretary of the PDP, and three others, after a meeting at the council headquarters of the party on Tuesday, said the decision to suspend Orubebe and his cohorts followed a petition received from concerned party men over their activities.


“The suspension was triggered by series of allegations of misconduct likely to cause disrepute, hatred, contempt, anti-party activities. Orubebe and the affected nine others are hereby referred to the PDP disciplinary committee in Burutu Local Government for further investigations,” the statement said in part.


Orubebe, who a few weeks ago openly indicated his interest to contest in the 2015 Governorship election in Delta state, is one of the Ministers in President Goodluck Jonathan’s cabinet with a very dismal record.


His Ministry has been unable to deliver the much-anticipated East-West federal highway despite the billions of naira voted for the project. The Minister is speculated to be building a huge war chest for his gubernatorial campaign with the funds meant for projects in the Ministry.


Orubebe and his political godfather, Chief Edwin Clark are presently at war over political control of their constituency and other issues.