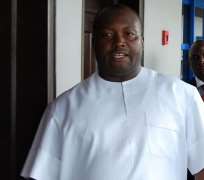 SAN FRANCISCO, June 04, (THEWILL) – Justice Abdul Kafarati of the Federal High Court Abuja has fixed June 25, 2013 for ruling on the matter of fundamental human rights (enforcement) brought by Ifeanyi Uba and his company, Capital Oil and Gas Limited against the Economic and Financial Crimes Commission, the Inspector General of Police and the Attorney General of the Federation.

According to a statement by EFCC spokesman, Wilson Uwujaren, Uba had approached the court seeking to restrain the EFCC, the Nigeria Police and the Attorney General of the Federation from investigating his alleged involvement in the oil subsidy scam, claiming that the investigation by the EFCC relates to a matter in respect of which he had been investigated and cleared by the Special Fraud Unit of the Nigeria Police Force and a judgment of the Federal High Court.

At the resumed sitting Tuesday, counsel to the applicant, Akinwumi Babs filed two further affidavits in response to the written address by counsel to EFCC, Rotimi Jacobs, SAN.

Jacobs had argued and adopted his written address, in opposition to the motion on notice dated 2nd May 2013, wherein he urged the court to determine “whether the judgement of the Federal High Court in Suit no: FHC/CS/07/2013, Patrick Ifeanyi Uba and One Other VS Inspector General of Police & Three others delivered on 18th February 2013; the alleged exoneration of the applicants by the House of Representatives Committee investigating fuel subsidy fraud and the letter of 12th February 2013 by the Police Special Fraud Unit purportedly clearing the applicants of criminal complicity, conferred any immunity on the applicants from criminal investigation and/or prosecution.

“Whether there is any infraction of the applicant’s fundamental rights as enshrined in Section 35(1) (c) & 36(5) of the Constitution of the Federal Republic of Nigeria 1999 as amended, and Article 13 of African Charter on Human and People’s rights as to entitle the applicants to the reliefs sought in this case”.

Jacobs SAN further averred that “In the instant case, the 1st respondent received three petitions alleging fraud in the payment of subsidy in the Petroleum Support Fund to oil marketers. The 1st respondent commenced investigations since January 2012 and gathered facts on the applicants. On three occasions, the 1st applicant was invited to come and state his own side of the story but on each of the occasions he bluntly refused to honour the invitation”.

According to Jacobs, “there is no way a mere invitation and opportunity given to the applicant (Uba) on the 30th April, 2013 when he made his statement can amount to an infraction of the presumption of innocence”.

Similarly, counsel to the applicants argued and adopted his further affidavit in response to the written address by the prosecution.

Justice Kafarati then adjourned proceedings to June 25, 2013 for determination of the matter.

Uba is being investigated by the anti-graft agency for allegedly defrauding the Nigerian Government by drawing subsidy for non-existent fuel imports under the petroleum support fund.