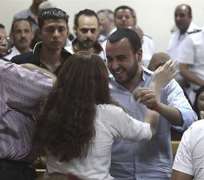 An Egyptian court sentenced at least 15 U.S. citizens in absentia to five years in jail on Tuesday and jailed an American and a German for two years in a case against private foreign groups seeking to promote democracy.

The defendants were charged with running unlicensed organizations and receiving funds from abroad illegally.

The Americans sentenced in absentia include the son of U.S. Transportation Secretary Ray LaHood. The case caused the worst crisis in decades in ties between the United States and Egypt, recipient of $1.3 billion a year in U.S. military aid.

At one point Egypt placed travel bans on the suspects, including U.S. citizens who took refuge in the U.S. embassy. They were allowed to leave the country on bail of $330,000 each, money that ultimately came from the U.S. government.

Egypt was run at the time by a military council that assumed power from the deposed Hosni Mubarak.

The jailed American is Robert Becker, a former NDI employee who opted to stay in Egypt and face trial instead of leaving. The German is a woman employee of Germany's Konrad Adenauer Foundation. Three others whose nationalities were not immediately clear were also given two years in jail.

The judge handed five-year sentences in absentia to 11 other defendants identified by the charge sheet as citizens of Norway, Serbia, Germany and Arab states and one whose nationality was not given. Eleven Egyptians who faced lesser charges received one-year suspended sentences.

The government said the NGOs were operating illegally in Egypt and complained that after the anti-Mubarak revolt, the U.S. government had diverted $150 million from its Egypt aid budget to these NGOs, breaking bilateral agreements.