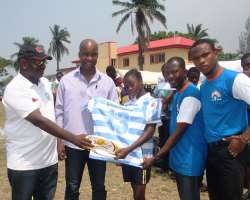 Lagos, Nigeria, 30 May, 2013: Cowbell iTry Rugby league for Secondary schools in Lagos State has commenced in style with the launch of the first cluster made up of eight teams competing at the CMS Grammar School Bariga, Lagos as a curtain raiser to the Lagos 7s final.


The league which is grouped into four clusters and have 34 schools participating marks the culmination of efforts by Promasidor, maker of Cowbell Milk who is sponsoring this year's game to ensure a resurgence of rugby games in Nigerian schools after many years of neglect.


Last year Promasidor in partnership with Nigeria Rugby Football Federation (NRFF) launched the coaching cluster with the aim of grooming future rugby stars and to support the game of rugby in the country.


Speaking at the opening ceremony, the Managing Director, Promasidor, Chief Keith Richards, represented by Assistant Brand Manager, Cowbell, Mr. Kingsley Onuoha said that the company was driven by its dream to see the young stars it was grooming to play for the Black Stallions- the Nigeria National rugby team.


“I daresay that if we continue with this level of commitment, we can achieve a lot. This launch is more iconic due to the fact that your favourite milk brand and official sponsor, cowbell milk is 20 years in Nigeria. Over the federation, cowbell sponsors mathematics competitions, educational activities and it demonstrates the commitment to sports with the cowbell football academy and now the cowbell rugby for Lagos State secondary schools. This support shown by the brand helps to provide the nutrition for mental and physical excellence,” he said.


Richards noted that it was important for young students to gain an appreciation of what the game's world governing body described in 2001 as the 'Spirit of Rugby' adding that the game of rugby should be approached with passion, commitment and respect.


The National Youth Development Coordinator, NRFF, Mr. Chukwuemeka Ejikeme who commended Promasidor as the biggest sponsor of the rugby games in Nigeria called on other corporate organizations especially the indigenous firms to emulate Promasidor for the overall development of rugby games in the country.


“We decided to have the schools play touch instead of full contact rugby because the kids are still learning the game and we want them to play without fear and get a feel of the game before introducing full contact rugby,” Ejikeme said.


According to the Chief Executive Officer, NRFF, Mr. Babajide Afolabi, “rugby builds character and instils values such as teamwork, discipline, respect for the laws and match officials and respect for the opposition, adding that governments across the world see schools' rugby as a vital part of a healthy school curriculum.”


He noted that the partnership with Promasidor was the most important thing that has happened to NRFF.