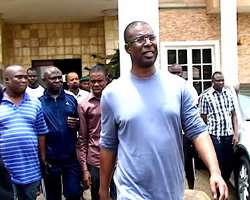 SAN FRANCISCO, May 30, (THEWILL) – Former Bayelsa State Governor, Timipre Sylva Thursday failed in the bid to repossess his international passport as Justice Adamu Bello of the Federal High Court, Abuja threw out his application for lack of merit.

Sylva had approached the court for the release of his passport claiming that he needed the document to enable him travel to the United Kingdom to be with his wife who is due to undergo a surgical procedure.

At the last sitting, his counsel told the court that the former governor had given an undertaking that as soon as he returns from overseas, he will deliver the passport back to the Registrar of the court.


The EFCC counsel also revealed that there were pending allegations against the accused person and his wife and that the trip was a ploy to escape current investigation and possible trial.


Justice Bello in his ruling on Thursday May 30, 2013 dismissed the application on the grounds that the London doctors will deal directly with accused wife and so the application lacks any urgency. The judge also held that the letter from the London Hospital was addressed to No. 38 Malbrone Avenue, London where the wife of the accused is residing and so had no link with the former governor.