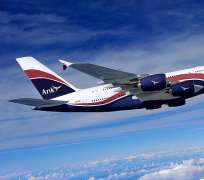 What could have turned to be an air mishap yesterday was avoided by the experience of the Arik Pilot of Flight W 3788 conveying over 100 passengers from Lagos to Asaba.

The flight which was supposed to take off at 8:30 am was delayed in Lagos on account of bad weather. Though travellers had boarded the flight, but after about 2 hours inside the plane, they were asked to go back to the departure lounge as the plane could not take off on account of what the pilot called "terribly bad weather at Asaba." After about 3 hours, the flight was boarded again because weather reports showed improvement within the internationally accepted landing standards. By the time it was boarded again, many people who sensed the situation as warning from Providence had already cancelled their trips.

On getting to Asaba, the weather became bad again. Attempts at landing was difficult. Not wanting to take chances the pilot promptly returned to Lagos. On reaching Lagos, the weather there had already gone very bad by aviation standard. The plane had to circle around for hours amidst dwindling aviation fuel. It finally landed at 4:45 pm amidst signs of relief from traumatized passengers who clapped in jubilation. The pilot, Captain Sandy Miller merely told passengers to thanks their God for His mercies when they got home.

Speaking to aviation correspondents at the Domestic Wing of Murtala Muhammed Airport, Gov. Obi, who travelled to South-Africa on Sunday and came back yesterday to Lagos said he was determined to make the flight to Asaba en route to Awka because he did not like staying outside Awka more days than necessary.

Moreover, he said that he had already planned so many things he would have done at home yesterday. When he was persistently asked those things, he reluctantly said that he had projects to inspect such as the progress of work at Upper-Iweka, the drainage challenge at Ogidi as well as the site for the construction of Agulu Lake Hotel Resort, which, according to him, would take off in a matter of days.

Obi said that following discussion with some investors in South Africa that requested land to build their facility in Anambra and some existing ones that want to expand, that he planned to visit some identified sites for consideration. "Moreso, I have planned to treat many files in the night," Obi said. On whether he was frightened, the Gov. laughed and said that nothing again should be frightening to a person that governs a state like Anambra, moreover, he said, he was always at peace with His God and fellow human beings to worry over the vicissitudes of life.

Speaking on the experience, one of the passengers, Barr. Donald Emeh said that as a frequent flyer, that he was used to such situations. He nevertheless gave glory to God for safe landing at last. He jokingly described how those on board turned into emergency prayer worrriors, casting and binding the spirit of plane crash.

Speaking on the development, the Majority Leader of Delta State of Assembly, Hon. Chief Igbuyo, who along other Governement officials said the incident is instructive on why one should be prepared at all times.