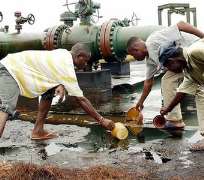 SAN FRANCISCO, May 26, (THEWILL) – As the battle to stop crude oil theft in the Niger Delta gathers momentum, soldiers attached to the 3 Battalion of the Nigerian Army, Effurun, Delta State, over the weekend, arrested a pregnant woman, a nursing mother and three others for their participation in crude oil theft.

One of the three others arrested , all middle-aged men, was said to carrying an identity card of a security firm owned by a former militant leader and 'Grand Commander of the Movement for the Emancipation of the Niger Delta (MEND), Chief Government Ekpemupolo a.k.a Tompolo.

The women, whose names were given as Tokere Lucky, 22 and Ebibsre Ayas, 36, were said to have been rounded up while scooping already refined crude from a wooden boat into jerry cans at an illegal local refinery in an Ijaw creek village.

Commander of the Battalion, Lieutenant-Colonel Ifeanyi Otu, who personally led the operation, confirmed the arrest while parading the suspects before newsmen. He said the suspects were caught while scooping substance suspected to be diesel and black oil.

“We set out for the operation which led to their arrest as early as 5 a.m. and combed the creeks in Bennet Island, Opumami, and Macaraba areas in Warri South and South West Local Government Areas of the State.

"At the end of the operation which started at about 5 a.m, we arrested five persons including the two women,” he said.

He said one of the suspects tried to jump into the river on sighting the team but was arrested, adding that over 15 wooden boats popularly known as Cotonou boats used for conveying the illegally refined petroleum products were also set ablaze during the raid.

Otu, who also listed the other three suspects to include Olotoye Rufus, Emotoghan Akpos and Victor Tene, said the suspects would be thoroughly investigated before being handed over to the appropriate authorities for further action.