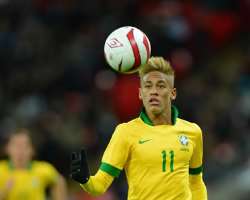 Brazil's gifted World Cup hope Neymar is moving to Spanish champions Barcelona, the striker said on Saturday, and will sign a five-year contract on Monday.

Neymar chose Barcelona over their Spanish arch-rivals Real Madrid after Santos ended three years of resisting offers for the 21-year-old forward and let him go before next year's tournament in Brazil.

"My family and friends already know about my decision... I want to thank Santos' fans for these nine incredible years. My feelings for the club and the fans will never change," Neymar added.

"Titles, goals, dribbles, celebrations and the songs the fans created for me will always be in my heart.

"This is a different moment for me, sad (departure) and happy (new challenge). God bless me in my choices.

"I made a point of playing tomorrow's match in Brasilia. I want the opportunity to enter the pitch once more with the 'mantle' (Santos shirt) and hear the fans shout my name."

Santos play Flamengo at the capital's completely refurbished World Cup stadium in their opening match of the Brazilian championship on Sunday.

The club said on Friday they had agreed to transfer Neymar, letting him choose between two offers.

Barcelona said Neymar "stands out for his polished skills, he makes a difference and scores goals. ... He has received many accolades and the praise of the celebrated Pele, of whom he is considered his heir".

The pair faced each other when Barcelona beat Santos 4-0 in the Club World Cup final in December 2011.

Barcelona are looking to revamp their stellar squad after what by their high standards is a slump during which they have been eliminated from the European Champions League at the semifinal stage for the last two seasons.

Lining up Messi and Neymar together will likely keep the Barcelona standard at least as high as in their Champions League and Club World Cup winning seasons, a benchmark arch-rivals Real Madrid could struggle to match.

Neymar has been a target of top European sides for at least three years, including Chelsea in 2010, but Santos managed to reject all offers and improve his deal with sponsorships.

The ready smiling Neymar became a celebrity, had a part in a television soap opera and admirers imitated his Mohican style haircut.

However, since the middle of last year a move had become increasingly difficult for Neymar to resist while Santos lost the form that took them to their third South American Libertadores Cup title in 2011 and first since Pele's 1960s heyday.

"After rejecting a series of million-dollar offers for Neymar Jr, since the middle of 2010... against the trend in Brazilian football of selling its best talents quickly, Santos FC finally agreed on negotiations," Santos said.

"Santos FC is freeing Neymar Jr, knowing they made all the efforts to keep him in Brazil for as long as possible, even offering to renew his present contract ending in July 2014.

"Given the confidentiality of the contract, by mutual agreement, the bases of the negotiation will not be divulged by the parties."