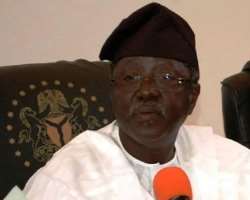 Confirming the position, the Governors of Katsina State, Alhaji Ibrahim Shehu Shema also said in the overall interest of the nation, he and his Bauchi State counterpart, Mallam Isa Yuguda had to step down their ambition to lead the Forum when the Northern Governors endorsed Jang as the consensus candidate.

Governor Jang made these remarks while addressing the media after the inaugural meeting which he presided as the Chairman.

In a communiquÃ© signed by Governor Jang and his Deputy, the Governor of Ondo State, Dr. Olusegun Mimiko, they vowed to unite members of the NGF, and work for the unity of the country.

According to the communiquÃ©, the Forum restated 'its commitment to continue being a platform for peer review, productive and collaborative engagement with all levels of governments.

The Forum also resolved to continue to encourage and collaborate with Mr. President to restore peace and security in the country and to secure a befitting permanent secretariat outside any Governor's Lodge and thanked all Nigerians for their support while promising not to let them down.

Fielding questions from newsmen, the Deputy Chairman described as fraudulent the process that purportedly produced Governor Rotimi Amaechi and said even in a village council election, an out-going Chairman cannot preside over his own election.

He said it was in acceptance of the leadership of Chief Jang that 18 Governors turned up for the inaugural meeting despite the less than 12 hours notice and expressed optimism that the next meeting would bring more Governors to the fold.