STATE OF EMERGENCY: So far, so good? The current full scale military campaign to restore normalcy in the three states of Borno, Yobe and Adamawa overwhelmed by Boko Haram insurgency and to protect the country's territorial integrity and sovereignty, which began 24 hours after President Goodluck Jonathan on Tuesday May 14, 2013 declared state of emergency in the most troubled areas of the north, seemed yielding results in various aspects.

For several years now, Boko Haram terrorists have been disturbing the peace of some North-East states, unleashing mayhem on innocent people, recklessly destroying human lives and properties, threatening national unity without serious challenge from anywhere. The presidential proclamation of emergency rule dramatically changed the tide, forcing the insurgents into disarray, now scampering for safety in the wake of heavy combined military bombardments.

First to fall were camps of the terror merchants located in the thick forests of Sambisa Game Reserve in Borno State used as recruiting and training base which, ordinarily, security operatives dared to reach but known to the Northern political leadership, influential traditional rulers and elders.

While the insurgents were enjoying the killing spree in which nobody was spared including military and police personnel falling victims almost on daily basis, the northern elders and prominent traditional rulers were busy putting pressure on President Jonathan to grant amnesty to the terrorists - a request that Mr. President finally succumbed to, against his initial objection.

With thousands of soldiers deployed to the troubled areas supported by armoured tanks, fighter jets and gunships on a scale not seen ever since the insurgency started, people are getting to know that the Federal Government really meant to forcefully resolve this lingering problem once and for all by taking such extraordinary measures. 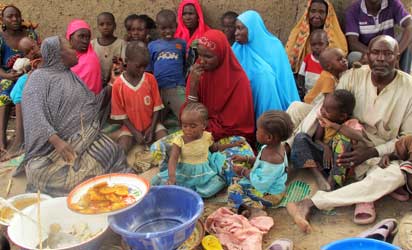 According to Saturday Vanguard search, relative peace is gradually returning to the affected areas. A trader who just returned from Borno (pleading anonymity) told this reporter at Alaba-Rago, on the outskirt of Lagos, that peace and tranquillity were slowly coming back mainly because of the state of emergency. He expressed gratitude to President Jonathan for his bold and courageous action to save the unity of Nigeria.

'Emergency option I believe is the best when things are getting out of control. This action is overdue and you need to stay in Maiduguri and surrounding villages to know how terrible life has become since Boko Haram came into existence. They've thrown the North into chaos. You see that so many efforts at peace had been carried out, but none worked until this state of emergency. I pray the peace will continue till the end.'

Musa Yerima, a second-hand clothes dealer who claimed to have come to Lagos from Damaturu, Yobe State, welcomed the military onslaught to dislodge the terrorists, saying it's better to be late than never.

'Since the operation began, there had been no communication but those few that I saw here who fled, expressed support for emergency rule which is bringing hope for peace. I believe this military action is the best way for lasting peace. My fear is that Boko Haram may go underground because of the bombardment and then return when soldiers have gone,' he said.

From all indications so far, the frequency of killings, bombings, abduction and suicide attacks have drastically reduced, pointing to the obvious fact that emergency rule is yielding some slow but positive results. It is most likely that if the momentum is sustained at least for six months when emergency may last, then the bloody insurgency would be a thing of the past.

It was reliably gathered that so many villages captured by Boko Haram sect have been liberated and recovered. Several of the insurgents  have fled to neighbouring states and countries bordering Nigeria showing that the military is getting it right. With this development, more troops are being sent to the borders to prevent escape of terrorists from the embattled states. Border security has been beefed up aimed at checking the influx of undesirable elements into the country as our borders had been porous before the declaration of emergency, making criminals to enter at will.

The need for medical presence side-by-side with the military assaults seemd to be gaining consideration so as to cater for people caught in possible cross-fire. Defence Headquarters had announced the arrest of 120 Boko Haram terrorists as the military seemed determined to crush them.

According to the Director of Defence Information, Brig-General Chris Olukolade, terriorists fleeing Nigeria towards Chad and Niger Republic are being contained by multi-national Joint Task Force in various locations towards the border.

Also villages and environs now liberated were named as New Marte, Hausari, Krenoa, Wulgo and Chikun Ngulalo, an area said to be under the full authority of Boko Haram, just as all the terrorists camps sited in those environs have been sacked.

Civilian/military interaction now enhanced to promote peace as citizens and local population are being assured of their safety and freedom from frequent terrorist attacks which had always kept people on their toes without peace of mind.

The 24-hour curfew imposed in some parts of Borno, Yobe states have been relaxed. Areas in Maiduguri  capital city like Bakin Kogi, Kasuwan Shamu-Kofar Biyu, Gamboru customs Area, Mari Kuwait Area of University of Maidiguri, while other areas  and wards such as Ruwan Zafi customs, 202 Housing Estate, Bama Road, 303 Housing Estate also in Bama Road and Dikwa Low-cost Housing Estate had the curfew relaxed from 6 a.m to 7pm, according to a reported statement issued by JTF spokesman, Lt-Col Sagir Musa.

In Damaturu, Yobe Capital and its environs, due to return of relative peace, the  curfew has now been relaxed from 6am to 6pm.

Even National League football matches are being played in Maiduguri as chairman of the league management company, Nduka Irabor assured of safety, saying there is no cause for alarm.

'We hear they have relaxed the curfew and there is no cause for alarm', he was reported saying.

Trucks carrying food items are now allowed to go into the interior villages which was not so before state of emergency declaration as soldiers mounted road blocks preventing  movement into the remote environs. Food and medical materials are expected to be moved into battle areas so that the people can survive.

In an unexpected change of mind, as the offensive to dislodge the insurgents continued, President Goodluck Jonathan directed the release of suspects especially children, women, held in police, DSS and military detention centres over the insurgency, there by introducing human face to the emergency operations.

According to the Director of Defence Information, Brig-Gen Chris Olukolade, the move is in furtherance of the federal government's position in response to requests by the presidential committee on dialogue and reconciliation. This will help to enhance peace efforts.

Most of the local governments in the three states captured by insurgents and flying Boko Haram flags have been re-taken by Nigerian troops and national flags hoisted in these buildings, according to travellers who managed to leave the affected states.