Fergie Bows Out As United Draw 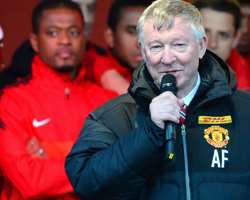 English football witnessed the end of an era on Sunday as Alex Ferguson signed off as Manchester United manager with an extraordinary 5-5 draw at West Bromwich Albion in his 1 500th and final game.

On a sun-kissed afternoon at The Hawthorns, the ground with the highest altitude in the Football League, the 71-year-old Scot who propelled United to the summit of English football on 13 occasions bowed out with a hectic game full of the attacking football that he loves.

The champions led 3-0, and then 5-2, but West Brom scored three times in five minutes, with substitute Romelu Lukaku completing a second-half hat-trick in the 86th minute to prevent Ferguson from signing off with victory.

Ferguson, who amassed 38 trophies in 26 and a half years at Old Trafford, will be joined in retirement by 38-year-old midfielder Paul Scholes, who made his 718th and final appearance for the club as a 69th-minute substitute.

Prior to kick-off, fans queued to buy souvenir edition match-day programmes, which contained a fulsome 40-page tribute to Ferguson from West Brom.

The Scot was welcomed onto the pitch with a guard of honour from both sides and the hosts' generosity did not stop there, as slack defending enabled United to establish a 3-0 lead inside 30 minutes.

In the sixth minute, Javier Hernandez crossed from the right and the untracked Shinji Kagawa beat United old boy Ben Foster with a near-post header.

Three minutes later, United were again afforded space on the hosts' left flank and a drilled cross from Antonio Valencia was inadvertently turned in by floundering defender Jonas Olsson.

United's fans were predictably boisterous, throwing a red flare onto the pitch at one point, but their exuberance provoked an angry reaction from the home support, with stewards and police obliged to intervene.

In contrast, the game itself was almost completely devoid of needle, and Alexander Buttner exploited further inattention from the home defence to dispatch a crisp shot into the bottom-right corner from Tom Cleverley's pass on the half hour.

James Morrison pulled a goal back in the 40th minute by sweeping in a Graham Dorrans cross and Lukaku cut the deficit to a single goal by steering a low shot past United goalkeeper Anders Lindergaard five minutes after coming on at the break.

United responded immediately, however, with Robin van Persie converting a Valencia cut-back to claim his 26th league goal of the season before Hernandez turned in a low cross from substitute Ryan Giggs to make it 5-2.

Olsson compounded a dreadful afternoon by hoisting a volley over the bar from only four yards, before the self-effacing Scholes came off the bench for the final game of his long and distinguished career.

Victory would have seen United equal their best-ever Premier League points tally of 91 in a 38-game season, but instead, Youssouf Mulumbu and Lukaku scored twice within a minute before Lukaku bundled in Marc-Antoine Fortune's cross with four minutes left to complete an incredible comeback.

It was a disappointing end to the game for Ferguson, who wore a rueful smile as he shook hands with opposite number Steve Clarke before walking onto the pitch to say goodbye to the United fans for the very last time.