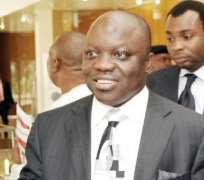 
THE National Vice Chairman of the People's Democratic Party (PDP), Dr. Sam Sam Jaja has described the developmental strides of Governor Emmanuel Uduaghan's administration as a clear manifestation of the successes recorded by PDP Governors across the country.

Dr Jaja who led zonal, state and the federal capital territory PDP Secretaries who were in the state for a two-day Retreat and facility tour of projects stated that from what Governor Uduaghan's administration has done in Delta State, 'PDP Governors cannot be matched in the area of project execution.'

'The airport shows that Governor Uduaghan has class and style,' Dr Jaja said, asserting, 'this is a window of what other PDP Governors are doing in different states of the country.'

He added 'I must commend the leadership quality of Governor Emmanuel Uduaghan' stating that the projects executed by the Uduaghan's administration are of international standard'.

Dr Jaja reiterated that the Government House built by the Uduaghan's administration 'is an edifice of world class standard' and assured that the PDP would continue to set the pace in terms of delivery of democratic dividends in the country.

He commended Dr Uduaghan's commitment to the educational sector stating that the buildings erected in various schools such as St Patrick's College and the State Model School showed the determination of a governor who had plans for the future generations of the state.

'The facilities I have seen today were built to international standards and are quintessential. The school buildings show the determination of a governor who has plans for the future generation of the people'.

The Delta State Commissioner for Works, Hon. Funkekeme Solomon who took the team on the inspection tour, said that the vision of Governor Uduaghan was to invest the money gotten from oil on infrastructure to prepare the state for a future without revenue from oil.

He explained that the Asaba International Airport was strategically erected to attract investors and make business transactions for Deltans with major markets across the country very easy.

He disclosed that the Uduaghan's administration has completed 18 road projects within Asaba metropolis within the year, disclosing that plans are on to construct fly-overs at strategic junctions to facilitate easy flow of traffic.