Obi in Canada, describes Nigeria as a Haven for Investment 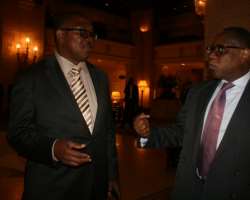 Obi in Canada, describes Nigeria as a Haven for Investment Gov. Peter Obi of Anambra State has described Nigeria as a haven for investment, calling on investors to consider the country for investment if they wanted returns on their investment. He made this call yesterday at the on-going Canadian-Nigerian Investment Conference taking place in Toronto, Canada.Obi who is part of the Federal Government Delegation led by the Vice-President, Arc Namadi Sambo, said that while other continents appear to be saturated in terms of investment opportunity, that Africa remained a virgin land, with her resources both natural and otherwise still largely untapped. His words: "Africa today represents a world of unlimited potentials in terms of investment. I say this because while other continent are either saturated or in various levels of saturation, Africa remains largely untapped."Speaking further, Obi said that even among African Countries, that Nigeria was a place to be considering her population, which, according to him, translates, ipso facto, to large market. Beyond Large market, he sited the friendliness and hospitality of Nigerians as another factor worthy of consideration.Though he agreed that the country is facing critical security and infrastructural challenges, he said that all other countries had their own challenges and that one fact that must be admitted was that the country under President Goodluck Jonathan, ably assisted by Arc Namadi Sambo was doing everything possible to overcome those challenges.Citing example of rewarding foreign direct investment in Nigeria, he used SABmiller as an example, saying the brewery giant, as well as other foreign ompanies that invested in Anambra State are doing excellently, far beyond their projections.The Conference, organized by the Federal Government of Nigeria in collaboration with the Canadian Council on Africa(CCA), and the Department of Foreign and International Trade (DFAIT) is aimed at boosting the volume of trade and investment between Canada and Nigeria.