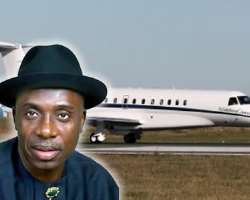 ABUJA, April 30, (THEWILL) – The House of Representatives, Tuesday, waded into the lingering crisis between President Goodluck Jonathan and Rivers State governor, Hon. Rotimi Amaechi, and mandated its Committees on Justice and Aviation to investigate the justification behind the "grounding" of Rivers State aircraft by the National Airspace Management Agency (NAMA).

The committee is to report back to the House within two weeks.

While presenting his motion, Idris, who represents Wase Federal Constituency, described the grounding of the plane, which was conveying Amaechi, Speaker of the House, Hon. Aminu Tambuwal and other members of the House to the burial of late Deputy Governor of Ekiti State, as a witch-hunt of perceived political enemies of the Presidency.

He told the House that he was "worried that impunity, lawlessness and political vendetta are now the order of the day in a 21st Century democratic Nigeria".

He noted that "a Bombardier BD 700 Global Express aircraft with registration number 5N565RS belonging to Rivers State Government, which conveyed the Governor of Rivers State and other government officials from Owerri to Akure was grounded by National Airspace Management Agency in controversial circumstances at Akure Airport on Friday, 26th April with a request that the entourage should contact either Hon. Minister of Aviation or Managing Director of Airspace Management Agency (NAMA) for clearance as the only condition for the aircraft to be allowed to fly."

He argued further that "the Nigerian Civil Aviation Authority (NCAA) subsequently issued a statement giving a different reason why the aircraft has been permanently grounded.

Idris, who also chairs the House Committee on Federal Character, noted that "there was an attempt to ground the aircraft at Owerri Airport on the orders of the Managing Director of NAMA for a different reason."

He said he was also worried that "three different reasons have been adduced for the controversial grounding of the Rivers State Government aircraft,” and said he was concerned that "this incident raises serious issues as to the abuse of powers by the Executive and the use of state machinery to witch-hunt perceived political opponents."

According to him, the trend was "extremely dangerous and detrimental to any democracy and tends towards dictatorship and draconian tendencies typical of the military era."

The motion was unanimously adopted without much debate and referred to Committees on Justice and Aviation for probe.