NIGERIAN SECURITY, WHERE WAS THE PRESIDENTIAL GENERATOR ON EASTER DAY? 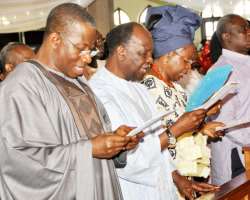 The question is not about the chronic impoverished power supply in Nigeria as we all know about this aspect of our national instability. What is worrisome is that the officials of the State Security Service (SSS) as the agents in charge of protecting the President of the Federal Republic of Nigeria failed in their sense of responsibility as it relates to adequate vast state security detail—as in the case of instant light visibility for security purpose.

Hopefully, they now know that constant backup in terms of power supply must be present at all times and be of necessity for the President’s safety.

With the volatile nature of our national security the reported six minute power outage is enough time for any hostile person or group to cause grave national crisis.

It was reported that an ex-Head of State, Gen. Yakubu Gowon also experienced the same power outage before President Jonathan’s reported situation which should have served as a signal for power supply emergency preparation.

Henceforth, everywhere the President goes should be mounted with a portable and powerful standby generator enough to carry the whole area of Tafawa Balewa square, Lagos.

If truth be told the SSS agents almost placed the two Presidents in a very difficult spot when it failed to adopt a proactive approach towards this type of risky and emergency situation.

The guiding principle of security work is the continued need for review of security measures in order to balance the need for efficient security and swift protective response.

In fact, within that five to six minutes of power outage the usual practice of using flashlight or light from cell phones as in the case of some Nigerian doctors operating patients under the light of lanterns and cell phones may not have worked well in this situation.

This sort of peculiar reinforcement tools may not be able to withstand any possible number of huge threats against the President and the entire Church celebrants.

From now on the nation’s security agencies should draw out procedures for a Presidential Generator (PG) in order to show the people that there is an ongoing protection for the President or any ex-Head of State.

In Jonathan’s own words on Easter day, he stated “We have our challenges as a nation in these days of terrorism (or extremism). It’s quite sad. I can assure you that we are working very hard and we will continue to work very hard and God willing terror attacks will not divide this country”.

One then wonders if the SSS is organizationally aware and current of these possible security risks and challenges, if so let the world see them setting up and mounting the presidential generator when next the President is scheduled for a speaking tour or visit across the country. John Egbeazien Oshodi, Ph.D.