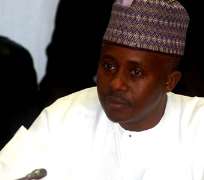 ABUJA, March 28, (THEWILL) – Following the controversy that trailed the removal of the former chairman of the House of Representatives ad hoc committee that investigated the petroleum subsidy regime management in the country, Hon. Farouk Lawan, the leadership of the House, Wednesday, cleared air on the matter, saying the embattled lawmaker was sacked on moral grounds.

It will be recalled that Lawan, who has been on suspension as chairman of the education committee pending the outcome of the investigation of the House Ethics and Privileges Committee on the allegations of bribery against him by Lagos businessman, Chief Femi Otedola, was replaced last week by Hon. Aminu Suleiman.

Spokesman for the House, Hon. Zakari Mohammed, who gave the explanation at the weekly briefing of the House correspondents, said the decision was based on moral grounds and it was meant to strengthen the institution of the parliament.

He said since the outbreak of the bribery story, both the House and Farouk had been convicted in the court of public opinion even though the matter was in court, adding that the leadership decided to relieve Lawan of his position so that oversight over agencies in the ministries could continue.

“The issue of Farouk Lawan is interesting because the House was so much lampooned in the public sphere for not taking action. As we speak, the issue is in court, but the question is how will he preside or have oversight on some of the agencies of the education ministry? We believe that as a matter of morality, another person should preside.

“We are not passing a guilty verdict on him. Farouk Lawan is an honourable and cognate member of the House. We respect him because he has done wonderfully well in his own rights for the House. But so much has been said about his matter and we as a House have taken our position,” he explained.

Mohammed however noted that appointment into leadership of committees was the prerogative of the Speaker and he decides who to appoint and when to change, adding that Lawan can still be given a position at a later time in the House.

He explained that the decision was not about Farouk Lawan as a person but about the institution of the parliament, stressing that the leadership was committed to anything that could strengthen democracy.

Lawan, was accused by Otedola of allegedly demanding and collecting $620,000 from him in order to exonerate his companies of complicity in the fuel subsidy bazaar. Although, Lawal initially denied knowledge of the deal, he later confessed that he collected the money to expose corruption and it was not bribe as alleged by the billionaire.

However, only Lawan is presently being prosecuted by the police. But the House spokesperson noted that the decision of the law enforcement agencies to arraign only Lawan was lopsided since the bribery scandal involved him (Farouk) and Otedola, hence both should have been in court to answer for their actions.