Bush and Co. Should be Prosecuted for War Crimes and Genocide against Iraqis 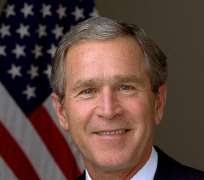 Before this tenth anniversary of the Iraqi war, former President George Walker Bush and VP Dick Cheney, Defense Secretary Donald Rumsfeld, National Security Adviser and Secretary of State Condoleeza Rice and her predecessor, Secretary of State Collin Powell and all other neoconservatives with their media conspirators who deliberately and knowingly planned and lied about Iraq then illegal invaded the innocent nation, should've been arraigned and tried in the 1945 Nuremberg format. Most of them should be in jail by now and not free as the evidence against them are glaring.

This is in violation of international law and Covenants such as the crime of aggression, crime against peace, war crimes of torture other crimes against humanity and genocide against Iraqis. Their investigation and subsequent prosecution should have been easier and possible if we're in a world that understands and practices honesty, respect for lives, true freedom, democracy and equality. If in a world of justice without regard to race, nationality or nation and other affiliations, empathy and success for all these people shouldn't be walking free on the streets of any country on earth. It's against human moral values and constructs and against every legal maxim aimed at justice that, these suspected war criminals are free and bragging, while the small and poor people who some or most times committed none of the crimes alleged are every day heckled by law enforcement in USA and other parts of the world.

This means unfortunately that, we aren't in such world of fairness, honesty, respect for lives, etc. Interestingly too, most seems satisfied with the lies and the killing of innocent Iraqis in uncountable numbers, and close to 5, 000 American soldiers who were murdered and several more thousands injured and permanently disfigured and disabled.

By this seeming silence, hence suspected conspiracy, especially the United Nations and the civil society plus media these war criminals have continued to brashly refused to apologize to Iraqis, Americans and the world. Instead they're beating their chest about their inglorious actions to imply they're right by lying that Saddam had Weapons of Mass Destruction (WMD) and had hand in 9/11 attacks, thus was a threat to his people and neighbors, etc. when none of the above existed at the time of invasion? How can people be right by lying and illegally or unjustifiably killing and destroying others; or are there new ways of doing wrongs that are right? There are no right ways of doing wrong or committing criminal acts, I believe.

It's likely that such Bush-like aggression, illegal and unjust invasion, mass killing and destruction of other people's nation-people's lifestyle, will continue unabated. If such likelihood exist (I believe it does where nothing is done to the Bushes of this world), where then will world peace, security and prosperity come. Why must the world keep silence as though American King Pins and war lords have the right (without credibility) to kill the innocent of other states and go free without questioning anywhere? By the way, what did Adolf Hitler et al do that Bush et al didn't do despite the difference in targets and number of deaths? Criminal conduct is criminal conduct, like killing is killing-genocide is genocide, right; so why must Bush and Co. be exempted from prosecution for masterminding a war, which has claimed many lives, destroyed properties and causing American economic and budget crisis?

Although American King Pins and war lords may be powerful, if the United Nations will be respected and marked as credible, fair and believes in human rights which includes fair and equal treatment or justice, it must acknowledge and assume its responsibility and duty to recommend Bush et al to the International Criminal Court (ICC) for investigation and prosecution. Irrespective of the manner in which Americans were lured into supporting this unjust war, it's now obvious that the public was lied to, confused and people's emotions toward 9/11 attacks taken advantage of. I'm sure there are millions of Americans and others of Western countries and their neighbors in other continents who will support the prosecution of Bush and Co. under the instrumentality of the United Nations.

It's time the world come together, reason and denounce such egregious crimes committed against Iraqis by showing there is still a world that's united, has a sense of transparency and honesty, fairness and justice, integrity, probity or accountability. The civil society must break the silence and apply the same vigor it applies to other cases of human rights violations in the so-called Third World to making sure Bush et al are held accountable if we don't want a repetition of these dastard and criminal acts.

According to Robert Jackson, former U.S. Supreme Court Justice, criminals (war criminals) are of the belief that what in human moral sense is criminal shouldn't be viewed as such by law. But, "Civilization asks whether law is so laggard as to be utterly helpless to deal with crimes of this magnitude by criminals of this order of importance. It does not expect that you can make war impossible. It does expect that your juridical action will put the forces of international law, its precepts, its prohibitions and, most of all, its sanctions, on the side of peace, so that men and women of good will, in all countries, may have "leave to live by no man's leave, underneath the law," wrote Jackson on the occasion of his opening statement at the Nuremberg trials.

Therefore, the time to return to, honor and protect the legal precedents of 1945 that was led by America under the leadership of President Franklin D. Roosevelt and U.S. Supreme Court Justice Robert Jackson is now. We must seize this moment onward and not run away from it because America is involved. If the world refuses to act and prosecute these suspected war criminals it will be a gross violation and betrayal of that trust of 1945.

It will also betray other international jurisprudence relating to such crimes, discrimination and selective justice against the Nazis, who of course, deserved the judgement received. America should cooperate if it understands and believes its principle of equal treatment and justice before the law. No one, no matter how highly placed, group or organization and nation should be above the law.