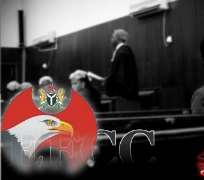 SAN FRANCISCO, March 25, (THEWILL) –The Economic and Financial Crimes Commission, EFCC, Monday arraigned one Mr Femi Esho before Justice A. R. Mohammed of the Federal High Court sitting in Abuja, on a one count charge of illegally trying to transport the sum of forty thousand and fifty United States Dollars ($40,050) from Nigeria to Istanbul, Turkey.

The accused was arrested at the Nnamdi Azikiwe International Airport with excess $40,050.00 after declaring only $5,000 to security personnel.

Esho pleaded not guilty to the charge when it was read to him.

The charge reads, “that you Femi Esho (male) on or about the 23rd day of March 2013 at the Nnamdi Azikiwe International Airport Abuja, within the jurisdiction of the Federal High Court while transporting in cash the sum of forty thousand and fifty United States dollars ($40,050.00) only from Nigeria to Istanbul, Turkey falsely declared to Nigeria Customs Service, the sum of five thousand United States Dollars (5,000.00) only instead of the said sum of forty thousand and fifty US Dollars as required under section 12 of the Foreign Exchange (Monitoring and Miscellaneous) Act CAPF 34 laws of the federation of Nigeria, 2004 and section 2(3) of the Money Laundering Prohibition Act No 11, 2011 and thereby committed an offence punishable under section 2(5) of Money Laundering Prohibition Act No 11, 2011 as amended by the Money Laundering Prohibition Amendment Act 2012.”

Justice Mohammed granted bail to the accused person in the sum of forty thousand US Dollars and one surety in like sum. The surety must be a civil servant with either the federal, state or local government.