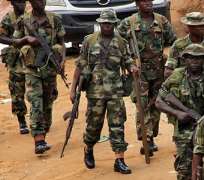 Eyewitnesses said those that were killed in the exchange of gunfire included a security personnel, two of the gunmen and some innocent civilians who were caught up in the crossfire.

Several houses, shops and vehicles were also said to have been set ablaze during the confusion.

The gunmen, armed with sophisticated weapons, had stormed a Coca Cola Depot at the Abba Liman Shopping Complex in the town where they seized an unspecified amount of money. But as they were about escaping with their loot, they encountered some security operatives believed to be soldiers from the Joint Task Force (JTF) which they engaged in gun battle.

A resident of the town said when the hoodlums got wind of the security operatives, they opened fire which led to the killing of a soldier.

In the exchange of fire with the hoodlums, two of the gunmen and innocent civilians were felled by stray bullets.

An eye witness who craved anonymity said the gunmen succeeded in killing one of the soldiers during the gun duel, adding that two of the gunmen were also gunned down, while innocent civilians were also killed by stray bullets.

“When I was running for safety, I saw a dead body of the soldier in military uniform, and some other dead bodies suspected to be those among the gunmen and civilians who were caught up in the gun battle. I also saw some houses/shops being consumed by fire," the eye witness said.

The JTF spokesman, Lt. Colonel Sagir Musa, and the Police Public Relations Officer, DSP Gideon Jubrin, however, could not be reached for confirmation of the development at the time of filing this report.