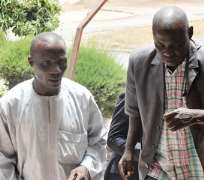 The first accused, an account officer posted from the Ministry of Finance to the office of the Secretary to the State Government to oversee payment of salaries of political office holders, used his position to create a fake portfolio (Commissioner for Planning) in the state executive council and opened a salary account for the purported commissioner through which he siphoned state funds in salaries and allowances.

The suspects who pleaded not guilty to the charge were alleged to have between 2009 and 2012, stolen the sum of N17, 444,509.90 (Seventeen Million, Four Hundred and Forty Four Thousand, Five Hundred and Nine Naira, Ninety Kobo) from the Plateau State government as salaries and allowances through an account opened by the first accused Simon Dalom in the name of Iliya Ezekie, a non-existent Commissioner of Planning.

The accused persons pleaded not guilty o the charge.

Attempt by the defence counsel, Edwin S. Mulan to move an oral application for bail for his clients was opposed by the prosecution counsel, who argued that the defendants should present a formal application before the court.

Justice Nimpar adjourned the case to March 25, 2013 for hearing of the bail application and ordered that the accused persons be remanded in prison custody.