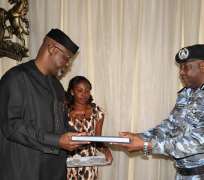 SAN FRANCISCO, March 20, (THEWILL) - Governor Liyel Imoke of Cross River has enjoined security agencies in the state to be proactive in tackling security issues for the state to remain the safest in the country.

Imoke stated this when he received newly posted service commanders to the state who paid him courtesy calls.

Imoke said the state could not have become the safest in the country if security agencies were not proactive to security situations.

The Governor maintained that as a state, whose economy thrives on tourism and investments, there is need for peace to be maintained.

He called on the men and officers of the armed forces to exhibit high level of discipline to enable them perform their duties while pledging to support and assist them to ensure the state remains safe for investment.

The Governor observed that the Air Force station in the state has grown in size since he assumed office and reasoned that it was proper for the station to be equipped with sophisticated gadgets, jets and manpower not only for the security of Cross River but for Nigeria because of its strategic position.

According to him, the armed forces should have the right resources at their disposal and work together to ensure peace while assuring them of a strong partnership.

On NCDC, he averred that their role in the state is important to the community and urged them not to compromise while carrying out their assignments.

He promised to provide the services with logistics and accommodation as requested to enable them perform their duties.

Earlier, the newly appointed commanders, who spoke separately, commended the leadership quality of Governor Imoke and pledged to ensure the state is safe for tourists, investors and Cross Riverians.

They promised to bring their wealth of experience to bear in the course of performing their national assignments and commended Cross Riverians for the cordial relationship, which exist between the civilian population and the armed forces.