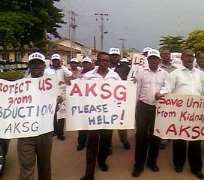 Threatening to make the state ungovernable if Udotong was not released within the stipulated time, the association maintained that its decision was not against the state government or the school authority.

The union chairman, Comrade Anyim Nwachukwu, who issued the threat during a protest by members of the association and some students, said the threat was against the abductors of Udotong, who is a lecturer in the department of Biochemistry at the University, as well as the security agencies which have failed to secure her release after five days in captivity.

The ultimatum came even as the abductors are demanding a N100 million ransom for the lecturer's release.

While acknowledging that the state government and the school authority have done so much to secure the lives and property of the people in the state,Nwachukwu lamented that the security agencies seem to be failing in their duties. He noted that the female lecturer was about the 10th member of his union to be kidnapped.

“Our protest today is to establish our displeasure over the kidnap of our colleague, taking cognisant of the fact that in the past, we have had scores of members kidnapped. We have noticed that for whatever reason, our members have been target of kidnappers.

“Our members had to stop their work today to register our displeasure over the issue. We want the authorities concerned to unravel the motives behind incessant kidnapping of our members.

“Congress met, we went out and congress has resolved that in 24 hours; if our member is not released and we do not have any positive report, congress will meet again and will take a decisive decision that may be very negative to the smooth running of this institution,” Nwachukwu maintained.

THEWILL reports that academic activities in the institution came to a halt as lecturers and students in their hundreds joined the protest round the campus, carrying placards with different inscriptions and chanting solidarity songs.

Our reporter further gathered that the abductors, Tuesday, established contact with the family of the female lecturer,demanding a N100million ransom.

Though Nwachukwu confirmed that contact had been made between the lecturer's family and her abductors, he denied knowledge of any demand for a ransom.

“I have been told that they have called the family but I can’t talk about the ransom here,” he said.

However, the husband of the abducted lecturer, Professor Ime Udotong, who works in the department of Microbiology at the same university has refused to talk with journalists.

THEWILL reports that Udotong, was kidnapped last Friday while returning from work at about 1.30pm.

Her abductors who came in a Toyota salon car, it was rumoured, trailed her from the school.

An eyewitness who spoke with our reporter disclosed that the lecturer was trailed from school to her house, where she was kidnapped outside her gate.

“I noticed that she had observed the car trailing her and she attempted to rush and turn into her compound, when the kidnappers double crossed her car, blocked her and forced her into their own car,” the eyewitness said.

Commissioner of Police, Akwa Ibom State Command, Mr. Umar Gwadebe, who confirmed the kidnap, said the situation was under control though no arrest had been made.