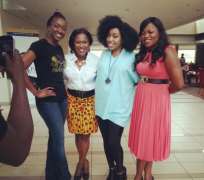 Four Nollywood superstars comprising Kate Henshaw, Funke Akindele, Uche Jombo and Rita Dominic have concluded the shooting of a new movie which highlights the menace of domestic violence on women in the society.

Speaking at a press conference held in Tinapa, Calabar in Cross River State, Kate Henshaw, who spoke on behalf of the three others, said there was an urgent need to make the world know about the issue by challenging the problem once and for all.

She was optimistic that 'New Horizon' would make the expected impact in tackling domestic violence in Nigeria and in Africa at large.

The film is to be premiered on Ebony Life TV soon.