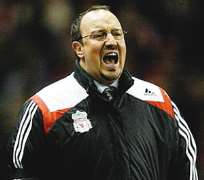 Rafael Benitez
The Football Association is attempting to sort out the fixture mess that was caused by the FA Cup quarter-final draw between Manchester United and Chelsea.

Everything hinges on Chelsea's Europa League encounter with Steaua Bucharest at Stamford Bridge on Thursday.

If Rafael Benitez's men are able to overturn a 1-0 first-leg deficit, they would qualify for a quarter-final that would be played in the two midweeks immediately prior to the confirmed FA Cup semi-final dates of April 13 and 14.

The preceding international break rules out United heading to Chelsea for the right to play Manchester City in the last four any earlier, as it is impractical to cancel Premier League fixtures due to be played this weekend as some have suggested.

It would leave the FA either asking for matches on Easter weekend - United visit Sunderland and Chelsea head to Southampton, both for TV fixtures - to be postponed, or those on the following weekend, which would include the Manchester derby.

The FA might be loath to do that, though, because it merely stacks up a problem for later in the season, with matches from this weekend, and those due to be played when the semi-finals take place, already needing to be rearranged.

That would force Chelsea into sandwiching the replay at the start of a midweek that also involves a European commitment.

Even that is not straightforward as Fulham are due to entertain QPR on Easter Monday, April 1, and local police are unlikely to sanction a cup tie on the same day.

The following Monday is when United are set to entertain City, although that fixture was set to be pushed back to the previous Saturday had Sir Alex Ferguson's men made it past Real Madrid in the Champions League.

An additional complication is whether Chelsea get drawn to play at home first, or away in the Europa League draw when it is made on Friday.