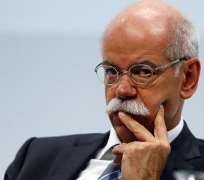 Embattled Daimler AG boss Dieter Zetsche will this week defend his strategy - and his job - by unveiling a new Mercedes seen as key to the premium carmaker's turnaround.

In his first major appearance since the board shortened his contract last month, Zetsche will be looking to the CLA compact to fix Daimler's chronic underperformance in small cars, as well as his own management record.

Both objectives face long odds.
Zetsche, 59, is on notice that Europe's luxury laggard must narrow the gap with BMW and Volkswagen AG's Audi by repairing a botched China expansion and winning new buyers for an expanded range of minis and subcompacts.

"Getting China right is critical, and Mercedes also needs to appeal to younger clients - which is why new vehicles like the CLA are very important," said Barclays analyst Michael Tyndall.

"The question is whether management now has the mandate and the wherewithal to realize the opportunities."

The CLA, which debuts at the Geneva car show on Tuesday, is a test of Daimler's ability to shake off a stuffy brand image partly blamed for Mercedes' failure to keep pace with its two main competitors.

Its premiere closely follows the February 21 board decision to trim Zetsche's mandate to three years from the expected five and swap the manufacturing and truck division heads, in a move seen as improving both men's CEO prospects.

Earnings goals have been repeatedly scrapped as Mercedes failed to match rivals' scale and efficiency in smaller cars, or their advances in China. Daimler's underlying profit fell 10 percent last year and is seen flat in 2013.

"The pressure is on for Zetsche to deliver on his strategy and close the gap with Audi and BMW," said Stefan Bratzel, head of the Centre for Automotive Management at the University of Applied Sciences in Bergisch Gladbach, Germany.

Daimler's pledge to reclaim the global premium crown by 2020, underpinned by a savings plan seen as vague, has "no credibility" so far beyond the CEO's likely tenure, according to DWS, Germany's biggest retail fund manager.

The company has yet to recover from misjudgments in China, the world's most important growth market, whose luxury car sales are set to overtake the United States and reach 2.7 million vehicles by 2020.

Late in 2012, Zetsche named a senior executive to head the China business and announced a merger of the two sales arms, more than a year after acknowledging the problems.

"The demand side may be harder to fix," analyst Max Warburton at brokerage Bernstein said. "The shine seems to have gone out of their brand - the S-class price cuts harmed their image and consumers seem less enthusiastic."

Mercedes opened 22 Chinese dealerships in the four months to January, according to Morgan Stanley, while BMW added 45 to reach 343 - increasing its lead to 101 outlets.

Daimler is "falling yet further behind ... despite claiming to be on a push to accelerate dealer expansion", said Stuart Pearson, author of the bank's research.

The China debacle is counted by some longstanding observers among signs that Zetsche is occasionally out of touch with conditions on the ground.

"People accept that he's very astute," said another autos specialist at a major investment bank. "The doubt is whether he's getting the right information to manage the business - it just doesn't feel like management has a firm grip on the data."

Under Zetsche, who heads both the Daimler group and the Mercedes-Benz business, the company has struggled to rein in undisclosed losses in smaller cars, understood to have reached 500 million euros ($650 million) at the Smart division.

The Mercedes A- and B-Class were barely breaking even prior to the smaller model's relaunch last year on a new front-wheel drive platform known as MFA.

With the more versatile architecture, Mercedes is moving on from its outmoded minivan aesthetic to roll out the sleeker CLA, followed by an SUV, increasing potential sales by as much as 50 percent, according to UBS estimates.

"Where they really failed against BMW is in the smaller car segments," said Philippe Houchois, a London-based analyst at UBS.

Zetsche nonetheless showed resolve in managing Daimler's 2007 demerger from Chrysler and reinvesting in Mercedes, Houchois said. "For all the misgivings, he hasn't been a complete failure."

CEO LEGACY
The CLA shown in Geneva, along with a series of other launches, gives him a chance to show what Mercedes can do with a refreshed lineup in 2015, Houchois added. "Zetsche's ambition is probably to leave with his head high, having delivered."

With 8.6 billion euros in operating profit recorded for 2012, Daimler is "neither a restructuring case nor a turnaround story", company spokesman Florian Martens insisted.

"We fully understand where we have to get ahead, and we have a very clear plan that we are executing," he said. "It just takes some time in the automotive industry."

But any pickup in Daimler's fortunes could be too little, too late to save the legacy of its current CEO.

Like Audi, BMW is determined to remain a step ahead by adding its own hot new models. And a combination of its Mini brand and 1-Series car platforms will yield further gains around the time Mercedes hits its sweet spot.

Bischoff sought to play down the succession talk more than a week later, telling Handelsblatt in a Friday interview there was no reason Zetsche should not stay beyond his current term.

Yet the swap is "likely to confirm Bernhard and Renschler as the front-runners to take over from Zetsche", Morgan Stanley said, noting that all recent CEOs have been internal appointees with experience heading the trucks business.

Far from being a planned move, however, the reshuffle was forced by union representatives during a turbulent board session as the price of their support for Zetsche's new contract, company sources told Reuters.

Bernhard, 52, first worked for Daimler in 1990 as a McKinsey consultant and rapidly made both a reputation as a cost-cutter and enemies in the powerful unions.

Following the ill-fated DaimlerChrysler merger, he was dispatched to the U.S. carmaker in 2000 and slashed 26,000 jobs there before returning in 2004, three years before Chrysler was sold.

After the unions blocked his next assignment as Mercedes brand chief, he took a five-year break from Daimler - including a stint at Volkswagen - until his 2009 reappointment as head of Mercedes-Benz Vans.

While Renschler's track record is more mixed, and tainted by his five-year leadership of loss-making Smart, he has won praise more recently for narrowing the truck division's performance gap with Swedish rival Volvo.

The 54-year-old's standing could be further improved if he achieves a smooth rollout of the new models and helps Daimler find 2 billion euros of promised savings, defying the doubters.

The job switch clouds Bernhard's status as heir apparent, according to Erich Hauser at Credit Suisse, by positioning Renschler "to take over Dr Zetsche's dual roles in three years' time while maintaining continuity at the trucks division".

But the airing of succession issues nevertheless weakens Zetsche by raising questions about the future, Hauser added. "Will we see a change of leadership at Daimler sooner than had been expected?"