Anambra 2014-Why victory will swing to APGA 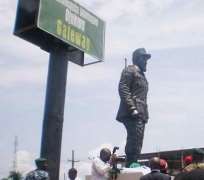 As Obi's administration turns the last bend, facing the 2013 governorship election stretch, the State is yet to witness activities in the polity. A note of caution still pervades the environment. Except for posters of one or two aspirants, the entire State is devoid of the mad social whirl reminiscent of a governorship election.

Those who have made public their interests to race the long stretch to Awka Government House still do so with utmost care. Snarled up in the same circumspection are some of the top guns who, ordinarily, would seize the moment. A cursory observer may be tempted to ask if, indeed, it is an election year in the State. Save for snippets of information, telling of their spade work, a good number of them seem to be shod of lead shoes. So far it is difficult to tell who among the aspirants is game.

A lot of reasons have been adduced for the cautious approach. One is the decision by Obi's government to look in the direction of Anambra north senatorial zone for his successor. Ordinarily, a decision such as this would be dismissed as no issue in a governorship race such as Anambra State. The reason is simple. Anambra State is essentially republican, and hardly subscribes to anything that reeks of inhibition. Unbeknownst to many, the fairness of the decision is exacting heavily on those opposed to it. On the surface the idea may have won no converts, especially among aspirants from south and central zones, but it nonetheless compels a lot of them to thread with caution.

The reason for this is simple. The decision has been embraced by folks in the State. It is set to deal with the fear of official conspiracy against the zone as well as assuage abiding feeling of unequal partnership in the Anambra project. None of those who have argued against the idea - mischievously imputing zoning to it - have been able to contradict the injustice of 22 years long denial. They have argued rather unconvincingly that since Anambra is homogeneous it will be wrong to suggest that a particular zone suffers neglect. A writer on the subject, arguing against the decision, cited rotational presidency in Nigeria as a necessary reaction to the country's multi-ethnicity. But he failed to tell his readers whether justice is to serve exclusively in a heterogeneous setting. Unfortunately this line of argument fails to make any impact with the people as the Obi's decision continues to gain popularity by the day. Assuredly, those opposed to it are evidently in no position to stop the tide of public sentiment against them.

Similarly the turn of events in All Progressive Grand Alliance fortunes affects a good number of the aspirants, particularly those from the other two zones. Until the recent court judgment, which removed the leadership of the party, not a few of them were in doubt about the choice of the party as their platform. This is especially so if it is reckoned that APGA has relatively better structure than others in the State. With the leadership of the party firmly in Obi's hands, some of the aspirants who had worked in hope are now forced to pitch tent elsewhere.

This is not without reasons. All the other parties like the PDP, ACN, Labour, and Accord are not credible alternatives. They are all struggling for relevance besides the fact that Governor Obi has worked APGA to some reckoning in the State. There is virtually no sector of the economy where his government did not make appreciable progress -health, education, judiciary, transportation, infrastructure, roads, security, etc. Among the people, APGA remains the first choice party. Any wonder, out of every four campaign billboards already hoisted, three of them are on the APGA party. This is rarely the case with the other parties. The PDP, for example, is accursed of the people and bedeviled by internal crisis that has left it comatose. Its performance record earlier in the State can hardly compare with what APGA under Obi has achieved in the last six years. A party like ACN may want to throw a punch, but it is going to be feeble. This is because it is neither accepted by the people nor has it made any meaningful impact since its cameo appearance on the State.

It may be fair to say here that those who are uncomfortable with the turn of events have resorted to cheap blackmail. I read and won't be surprised to read in the days ahead stories that will impugn the honesty of the governor's decision. But however hard the man's detractors try, the idea is set to accomplish its mission. No doubt he has been accused of sundry offences, ranging from rotating the office to owning vast business empire in Onitsha. The transformation in Onitsha, if not for anything else, shows that Obi listens to the voice of reason. Before now Onitsha, which has achieved urbanization long ago, was left in squalid condition. Needless to recount here what transformation Obi's government has brought to bear on the city. It is difficult to impute any other reason for this beyond fair conviction and the desire to redress past neglect.

But blinded by calumny, those opposed to the governor and the decision, fail to acknowledge his administration has done enough to bring development to neglected areas of the zone. Or that it took his administration to pioneer development efforts in places like Ogbaru, Ayamelum, Anambra West, East, Oyi etc. Unarguably the decision to support the zone is but the peak of all the efforts to bring the area at par with others. To the credit of the Obi administration a good number of communities in Ayamelum, Anambra East, West, Oyi, and Ogbaru have today witnessed government presence. The infrastructural bequest of the administration in the area in the past few years is, in indeed, unquantifiable.

Those who had argued against the idea of support for the zone, insinuating cheap political mileage for the government, failed to deny that Obi's government has worked hard to even up development among the zones in the State. The hitherto inaccessible communities in the zone can be accessed with the construction of Anaku - Ifite-Ogwari - Omasi Agu in Ayamelum; Umueze-Anam - Nmiata with a bridge (Otupu) in Anambra west. The construction of Nando-Igbariam through Achalla road now links the neglected part of Anambra east local government area. Ogbaru has no less of Governor Obi's touch of excellence. The trunk “A” road that links all the major towns in the local government is also constructed by the administration.

It is clear the race will be between APGA and the other parties. But unlike the parties, APGA is set to coast home to victory because of its relatively superior disposition.