Goldie To Be Buried On Monday Morning 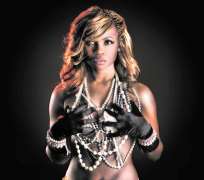 According to information available to Nollywoodgists.com, the late artiste with Kennis Music will be buried by 10am at Vaults & Gardens, Ikoyi, Lagos.

Goldie died on Thursday, February 14, shortly after arriving from the US from Grammy Awards. Her death two weeks ago has spurned many controversies.

There are reports that her 'secret' husband has been denied visa into Nigeria from Malaysia.