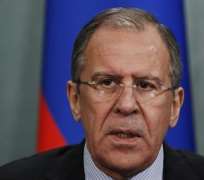 Russian Foreign Minister Sergei Lavrov accused the United States on Friday of having double standards on Syria, saying it had blocked a U.N. Security Council statement condemning a car bomb attack in Damascus.

Washington denied it had blocked the statement and said it had only asked for balance. The disagreement was likely to sour the atmosphere before Lavrov meets newly appointed U.S. Secretary of State John Kerry next week in Berlin.

Lavrov told a news conference Washington had disappointed Moscow by blocking a statement condemning "terrorist attacks" near the Russian embassy in Damascus that killed more than 50 people and that Washington was threatening international unity in the "war on terror".

"We believe these are double standards," Lavrov said after talks with China's foreign minister.

"And we see in it a very dangerous tendency by our American colleagues to depart from the fundamental principle of unconditional condemnation of any terrorist act, a principle which secures the unity of the international community in the fight against terrorism," he said.

A spokeswoman for the U.S. mission at the United Nations said it had not blocked any statement of condemnation but had sought to balance the text with criticism of Syrian President Bashar al-Assad's forces, which it said Russia had rejected.

"We strongly condemn all indiscriminate terrorist attacks against civilians or against diplomatic facilities," said Erin Pelton, spokeswoman for the U.S. mission.

Ties between Washington and Moscow have worsened since Vladimir Putin returned to Russia's presidency last May.

The passage of U.S. legislation intended to punish Russian officials accused of human rights abuses and a Russian ban on American families adopting Russian children have also contributed to the deterioration in recent weeks.

CHINESE AND RUSSIAN UNITY
Lavrov made his comments at a joint news conference with Chinese Foreign Minister Yang Jiechi after talks that underlined the closeness of their views on policy in Syria and North Korea.

China and Russia, both permanent members of the U.N. Security Council, have blocked attempts by the West to mount pressure on Assad to end the violence in the nearly two-year-old conflict that has killed some 70,000 people.

The two ministers condemned North Korea's nuclear test last week but said that any response should go through the U.N. Security Council.

China and Russia had agreed that it was "vitally important not to ... allow the situation to be used as a pretext for military intervention," Lavrov said.

North Korea's latest test, its third since 2006, prompted warnings from Washington and others that more sanctions would be imposed on the isolated state. The U.N. Security Council has only just tightened sanctions on Pyongyang after it launched a long-range rocket in December.

The North is banned under U.N. sanctions from developing missile or nuclear technology.

Fyodor Lukyanov, editor of the magazine Russia in Global Affairs, said the alignment of Russian and Chinese positions was meant to give them more leverage when negotiating with the West.

"Chinese and Russian positions so far on a global level are almost identical. This is an important factor, because if Russia were alone it would be much less powerful. This is a factor Western powers cannot ignore, that Russia and China act together," said Lukyanov.

He added: "China is ready to support Russia in the Middle East on issues which are politically important for Russia, so when it comes to questions of vital importance to China, like North Korea, of course it expects reciprocity - that Russia endorse China's position."