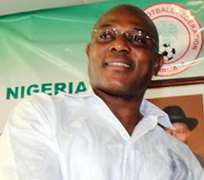 Head coach of the Nigerian national team, Stephen Keshi says there is no rift between him and the Nigeria Football Federation (NFF).

The ‘Big Boss’ revealed that he has a good relationship with the NFF and its president, Aminu Maigari.

“I wonder what people want to gain by saying I’m fighting the NFF. I’m at war with Alhaji Maigari, who in the first place found me worthy of employment as national team’s coach? I am seizing this opportunity to beg all those who are desperate to return us to the dark days of football that Nigerians know better now and won’t allow it,” Keshi said.

Keshi resigned as Nigeria's head coach this month but made a dramatic u-turn following a meeting with sports minister, Bolaji Abdullahi.

The 51-year-old coach has yet to lose a competitive match since taking the reins from former coach, Samson Siasia in 2011.