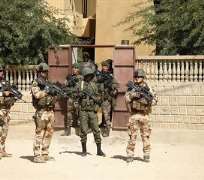 The Yemen-based offshoot of Al Qaeda urged Muslims to sacrifice themselves and their money to help fend off what it called the "Crusader war" in Mali, according to a statement posted online on Tuesday.

France intervened in Mali last month to check a push south towards the capital Bamako by Islamist forces who seized control of the north of the country in the confusion that followed a military coup in March 2012.

Their surprise advance pushed Mali to the forefront of U.S. and European security concerns, with fears the Islamists would turn the country into a base for international attacks.

Al Qaeda in the Arabian Peninsula (AQAP) compared the French intervention to what it called the "Zionist occupation of Palestine".

The group said supporting Muslims in Mali was "a duty for every able Muslim, to offer himself or his money, each according to his ability."

Formed in 2009, AQAP has carried suicide attacks on Yemeni government installations and military targets in Yemen. It was also behind a December 2009 plot to blow up a US airliner as it approached Detroit and a 2010 plan to send bombs hidden in computer printers on two cargo aircraft.

Former CIA director David Petraeus has described AQAP as the "most dangerous regional node in the global jihad".

The Mali offensive by French troops, which began last month, has pushed Islamist insurgents out of their strongholds in the north. But the militants launched a surprise raid in the heart of the Malian town of Gao on Sunday.

The brazenness of the rebel raid, which followed successive blasts by two suicide bombers at a northern checkpoint, was a surprise to the French-led military operation, which had so far faced little real resistance from the Islamists.