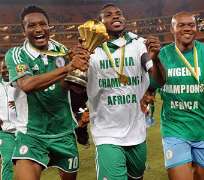 ABUJA, February 10, (THEWILL) - Encomiums started pouring in for victorious Super Eagles, Sunday night, as President of the Senate, Senator David Mark , urged Nigerians to savour the victory of the Super Eagles in South Africa and use it as a rallying point to further the peace and unity of the country currently challenged by unabating insecurity.

This came as the Speaker of the House of Representatives . Hon. Aminu Tambuwal, in a statement by his Special Adviser on Media, Imam Imam,also hailed the superlative performance of the Eagles,disclosing that the House will host the victorious Super Eagles during its plenary.

This came as former governor of Kwara State, Senator Bukola Saraki, also, on behalf of the people of Kwara congratulated the Super Eagles on their deserved victory,saying " we are glad you made us proud and united us as a nation," adding " I also congratulate the well coordinated National Sport Council led by Bolaji Abdullahi, a true Kwaran that has exhibited excellence in this capacity and also superior leadership by coach Stephen Keshi."

On its part, the ruling Peoples Democratic Party (PDP) in a statement signed by its National Publicity Secretary, Olisa Metuh, described the victory of the Super Eagles as a confirmation of its earlier declaration that the nation has entered into a new era of possibilities and will surmount its challenges under the current dispensation.

Senator Mark who led the Federal Government delegation to watch the final of the 2013 African Cup of Nations in South Africa, said he was pleased that the victory of the Super Eagles has offered the needed elixir and tonic to boost the peace and unity of Nigeria.

He praised the Stephen Keshi-tutored boys for the successes at continental championship, saying the nation owes them a great measure of gratitude.

The Senate President praised the Super Eagles for the team spirit displayed throughout the competition and implored all Nigerians to emulate the team spirit that brought the victory.

Mark particularly praised the Head Coach of the Super Eagles and his coaching crew for a job well done, pointing out that Keshi is a child of history and destiny.

In a statement issued in Abuja by his Special Adviser on Media and Public Affairs, Malam Imam Imam, Tambuwal described the victory as sweet, reassuring and a reaffirmation of the superiority of Nigeria over other African countries both in football and other areas of human endeavor.

He said the Eagles have not only regained the hearts of supporters the world over with their mesmerizing display, they have also lifted the spirit of the nation.

The Speaker said the unity of purpose shown by the team and their handlers reaffirmed the notion that when all hands are on deck, achieving common objective will be a lot easier.

While congratulating the team and the nation for the achievement, Tambuwal urged football authorities in the country to double their efforts and ensure that the team not only qualifies for the 2014 FIFA World Cup in Brazil, but win the trophy for the first time.

Also hailing the boys, the Peoples Democratic Party (PDP) described the victory of the Super Eaglles as a confirmation of its earlier declaration that the nation has entered into a new era of possibilities and will surmount its challenges under the current dispensation.

PDP National Publicity Secretary, Chief Olisa Metuh, in a statement issued on Sunday, said the fact that the team won the trophy which has eluded the country several times in the past is an indication that nothing is impossible for Nigeria and that the doors have been opened for the nation to achieve other goals.

"The fact that our players won the trophy is a confirmation of our earlier declaration that Nigeria has entered a new era of possibilities. With this, it is clear that the nation will surmount all its challenges under the present dispensation.

" It is an indication that there is nothing impossible and that collectively we will overcome all the challenges we are facing as a nation", the party said.

Former governor of Kwara State, Bukola Saraki, was philosophical in his reaction to the victory. " Victory at last, victory at all good costs, victory in spite of the rough start, however hard and rough the road may be, tonight we have set a new history on a victorious platform," he said in a statement issued Sunday night.

According to Saraki, "When victory comes; joyful are the memories of past struggles. Even though the eagles had a rough start, tonight they have made us proud, step by step, courage followed our hope and tonight the victory is ours.

"Tonight, from the city centres to the remote areas, neighbourhood to neighbourhood, Nigerians are truly united and filled with joy as the super eagles have strived against all odds and brought us the African Cup of Nations 'Gold Title' to us.

"On behalf of the people of my constituent in Kwara, I congratulate the Super Eagles on this well deserved victory, we are glad you made us proud and united us as a nation. I also congratulate the well coordinated National Sport Council led by Bolaji Abdullahi, a true Kwaran that has exhibited excellence in this capacity and also superior leadership by coach Stephen Keshi

"This victory is a call to other football loving Nigerians to join us and let's support our local league, let's build it so as we are champions of Africa, our league is also champion of all African football leagues."

Saraki also advised that regardless of how we feel in any situation," we should emulate the Super Eagles by believing in ourselves and act as winner." He added that " even if we are behind, a sustained look of control, determination and confidence will give a mental edge that will definitely lead to victory as we have seen in the Super Eagles."