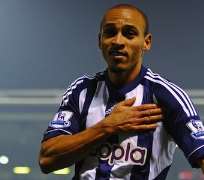 Latest development has emerged that West Bromwich Albion and Peter Odemwingie are set for fresh talks over the future of the Nigerian at The Hawthorns.

According to Express & Stars, Albion are planning talks with Odemwingie and his representatives in the wake of reports of a shock bid from English Championship side, Crystal Palace.

"Senior Baggies officials will hold further discussions with Odemwingie and his representatives in a bid to thrash out an end to their war of words.

"But the talks will be held with Albion bracing themselves for a move from Championship promotion-chasers Crystal Palace to take the 31-year-old on loan for the rest of the season," reported the English newspaper on Thursday.

Albion are in talks to see if the Nigerian forward will be restored to their team after falling out of favour in the wake of January's deadline-day transfer saga.

Odemwingie was hoping to join QPR on a £60,000-a-week deal before it fell through.

Though Palace are ready to offer Odemwingie an escape route but his weekly wage believed to be around £37,000 could scupper the proposed switch.

"Someone contacted the chairman. I was asked if I would want him and I said yes, but I don't think he's a realistic target for us personally," Holloway said.

But West Brom are now keen to keep him, as his exit will leave their attacking options at a disadvantage.