Angolans back Ghana to beat Nigeria at Nations Cup 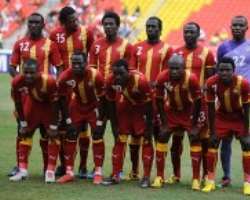 Ghana will play Nigeria on Thursday
Listen to article

Africa Cup of Nations hosts Angola might be out of the competition after a heartbreaking 1-0 defeat to Ghana in the quarter-finals, but football euphoria has not escaped the Angolans as the competition nears its final stage this weekend.

Since the elimination of the Palancas Negras (the Black Antelopes), the loyalty of the locals has been split as the remaining teams jostle for support.

And, with only four teams now still in the in contest, the debate in the streets on who will emerge victorious and claim the trophy is reaching fever pitch among football fans.

One fixture that remains the talk of town in the streets of Luanda is the much-anticipated clash between arch-rivals between Ghana and Nigeria at the November 11 Stadium on Thursday.

While most are still visibly upset by the Black Stars triumph over their team, the majority of the people believe they will have an edge over the Super Eagles.

Black Stars win the crowd Football tournaments are celebrations of sport but also the hosts countries, and Angolan locals have embraced the Nations Cup as an opportunity to showcase their land and the passion that they have for the game.

The tournament is at least an opportunity to craft a new image for their country, one not dominated by headlines of its civil war that lasted for over two decades, but a country that shares a special penchant for the beautiful Football enthusiast, Josia Marta Pedro was at the November 11 Stadium Sunday when the wildly supported home side fell to Ghana, and he is firm in his views that the Black Stars will continue from where they left off.

“They played very well against us, and I think they are the team to beat in this competition,” said Pedro.

“I like their style of play. They are quick, and they defend very well. Of course I was hurt when they defeated Angola, but maybe if I look at it fairly, they were a better team. They played good football.”

Going for Gyan Another local, who prefers to be called Macho, also predicts that the Blacks Stars will reign supreme.

“I think Ghana will win the tournament, and I don't think their game against Nigeria will be a problem. (Asamoah) Gyan will score again,” predicted Macho, naming the very player who broke Angola's heart with a goal Sunday.

However, Eusibin Ndatongalange, another avid football fan, differs with his countrymen in tipping the Super Eagles.

“My team now is Nigeria. Their match against Zambia was a close one, but I think they will do enough to go to the finals. I think the final will be between Nigeria and Egypt, and that will be a great match for all of us,” he said confidently.

A few hundred kilometres away in Benguela two other local rivals, Egypt and Algeria, will also lock horns.

And while that North African derby will certainly grab international headlines, in Luanda the West African showdown has attracted all of the attention.