LAGOS - PASTOR Daniel Omowumi, the owner of the two-storey building where the Dana air plane crashed into at the Iju-Shaga area of Lagos State and other ground victims have been paid USD 30,000 each as compensation.

Earlier, Pastor Omowunmi in conjunction with the Committee for the Defence of Human Right, CDHR, Funmilayo Unit had protested with other victims of the accident blocking the entrance to the Dana Air head office at Allen avenue, demanding the sum of N500 million for his property that were destroyed by the crash. 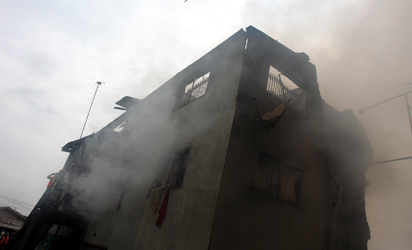 Head Corporate Communication, Dana Airlines, Mr. Tony Usidamen who confirmed the payment of compensation to the ground victims, said  Dana Air insurers were committed towards ensuring that all claimants were fully compensated to the extent of their losses.

Mr. Usidamen however pointed out that although the payment of compensation to the ground victims took some time, it was done according to the laid down processes by law and the settlement reached by all parties concerned.

According to him, 'We can confirm that payment of compensation to affected Iju-Shaga residents has commenced and the process is still on-going.'