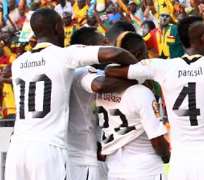 Ghana breathed life into their Africa Cup of Nations campaign by securing a narrow 1-0 win over Mali on Thursday in Port Elizebeth.

The match, which was a repeat of the 2012 finals third place match, saw Ghana exact revenge after losing 2-0 for the bronze medal.

Both coaches made changes to their starting line-ups for the opening Group matches against DR Congo and Niger respectively.

The Malians were the first to threaten the Ghana goal area when captain Seydou Keita nearly scored the opener on seven minutes.

Ghana goalkeeper Fatau Dauda came out from his line to clear a ball but slipped in the process and had to handle it to deny Keita from scoring.

Referee Doue Noumandiez booked the glove man and awarded a free-kick which was cleverly taken.

Ghana captain Gyan had a response to that six minutes later when he fired a shot inside the Malians' goal area after a nice control but that took a deflection off the body of centre-back Mahamadou N'Diaye.

Gyan again on 19 minutes attempted to wriggle his way through inside the box but his pass for on-rushing Emmanuel Agyemang Badu to connect home was over hit.

Left-back Harrison Afful launched an attack and cut in nicely but his effort went off target in a promising move.

Mubarak Wakaso also attempted to catch Mali goalkeeper Samasa Mamadou with a surprise shot from 25 yards but that went off target.

Midfielder Badu crashed the side post with a header from Wakaso's free-kick, but that turned out to be a build up to the goal. A nice move from Gyan who teed up Badu inside the box, but Adama Tamboura went in with a sliding tackle and gave away a penalty.

Referee Noumandiez pointed to the spot and Wakaso picked the ball up and blasted it pass Samasa for the opener in the 37th minute.

Ghana held on to the goal and went into the break with the advantage.

Just after the interval, Mali made the first attempt to score. Mahamane Traore showed a lovely piece of skill and sent in a cross which could not reach Keita who had made the run.

Ghana turned on the heat and Kwadwo Asamoah, who was now playing in a familiar offensive midfield role, was fouled close to the box. Wakaso dinked in a free-kick but it dipped late.

In the 55th minute, Gyan nearly doubled the lead when he shot a curly one from 19 yards but it went a few metres wide.

Four minutes later, there were calls for a penalty after Albert Adomah's cross hit the hand of Mahamadou N'diaye when he went to tackle Gyan inside the box.

Substitute Solomon Asante nearly scored with his first touch of the ball but he intercepted a his shot was off target.

Ghana need a draw against Niger in the final Group B match on Monday in Port Elizabeth to qualify.