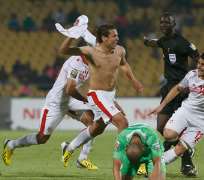 Youssef Msakni scored late in the second half to hand Tunisia a 1-0 win over rivals Algeria in their opening 2013 Africa Cup of Nations encounter at the Royal Bafokeng Stadium on Tuesday night.

The Algerians dominated possession and created more chances, but they were unable to make their opportunities count.

The Carthage Eagles were dealt a blow in the 16th minute when they lost their top striker and the most experienced player on the side, Issam Jemaa, due to injury, with Hamdi Harbaoui taking his place.

Algeria almost took the lead in the 23rd minute when Foued Kadir cut in from the left after receiving a long pass from Adlene Guedioura, but he was unable to get enough power on his shot and Moez Ben Cherifa made the save.

Six minutes later Islam Slimani came even closer to breaking the deadlock when he jumped between defenders to connect with a pinpoint cross from Sofiane Feghouli, but his header came off the crossbar.

Feghouli continued to be involved in Algerian attacks and in the 33rd minute he laid the ball back for Kadir, but the Marseille man disappointed again as he rushed his shot wide of the target from inside the box.

Sami Trabelsi’s side then came close to finding the opener against the run of play two minutes before the break from a counterattacking move which freed Saber Khelifa on the right, but he was denied by a good save from Rais Mbolhi.

Then eleven minutes into the second half Mesbah was given room to push forward from the left and cut inside before drilling a low shot from outside the penalty area which went just wide of the far post.

Guedioura almost caught the Tunisian goalkeeper by surprise in the 70th minute with a powerful strike from outside the box, but his effort flew just inches over the crossbar.

Five minutes later Tunisia had their best chance of the second half when Oussama Darragi played Harbaoui through on the left, but he sliced his shot wide from close range.

However, the Tunisians were able to collect maximum points in added time when Msakni stepped away from his marker before unleashing a long range shot into the top right corner, leaving the goalkeeper with no chance, 1-0.