Aftermath Of Attack:Emir Of Kano, Two Sons Flown To U.K For Medical Treatment 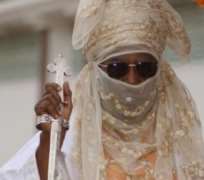 Pointblanknew.com can authoritatively confirm that the Emir of Kano and his two sons have left the shores of Nigeria to the United Kingdom in search of medical treatment after Saturday's attack on his convoy.

The Kano paramount ruler was in company of Alhaji Sanusi Ado Bayero, Ciroman Kano and Alhaji Nasiru Ado Bayero, Turakin Kano, who were wounded during the attack.

The Emir before his departure attended a special prayer section at Kano Central Mosque presided over by the Chief Imam, Sheikh Sani Zaharadeen .

It could be recalled that the Emir of Kano, Ado Bayero, last Saturday escaped death by whiskers when some gun men driving in a Sport Utility Vehicle (SUV) threw an explosive device and immediately opened fire on his convoy.

The driver of the emir was killed in the attack, including three of his guards who were in the convoy at the time of the attack, with some of them sustaining injuries.

Residents said that the incident happened at about 10.30am, when the emir was returning from the launching of an Islamic School at Masallacin Murtala, along Zoo Road in the metropolis.

It was gathered that the gunmen were said to have ambushed the convoy of the emir immediately his vehicle left the mosque where he has gone for a recitation ceremony of the Holy Qur'an.

However, the emir was safe and unhurt, as he had been moved to an undisclosed location.

Sources within the vicinity of the incident also told this reporter that the gunmen who came on motorbikes on sighting the emir's vehicle, opened fire which led to the death of the driver and three of the emir's guards.

Eyewitness account said the attack came after Palace Guards fired the traditional shots heralding the Emir’s exit from the event.

“After the traditional gun shots, we started hearing strange gun shots and People ran for dear lives. It was a terrible experience and the worst on the Emir. We praise Allah that he spared the life of our Royal Father,” according to an eye witness.

It was also gathered that the emir's guards who exhibited bravery on sighting the gunmen who had opened fire immediately maneuvered their way to shield the emir, and in the process, three of them were hit by the bullets of their assailant.

Kano has come under attacks from the dreaded Islamic terrorist sect, Boko Haram, though it is not known at this time if they are involved in this later reported incident.

The Emir of Kano, Alh. Dr. Ado Bayero had also suffered similar attacks, during a Sallah festival when some aggrieved youth threw stones on him and his entourage in Fagge area of the state.

Also, the Emir had narrowly escaped death at the City Central Mosque, when a teenager was teleguided by a local medicine man (marabout), in an attempt to carry out an assault on him.

Another recent one was when President Goodluck Jonathan was declared the President of the Federal Republic of Nigeria, an implication which some youths, under the guise, set ablaze vehicles parked at the Emir's palace and also in an attempt to forcefully gain entrance into the Emir's palace.