ONE YEAR AFTER THE MADALLA BOMBING 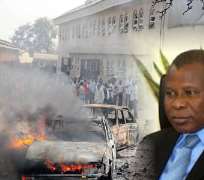 I attended a seminar last spring at the Kennedy School of Government, Harvard University that discussed the topic ‘The Future of Nigeria’. With so many things happening in Nigeria at the time, I expected a robust discussion particularly on the threat that insecurity situation poses to the country’s economic and political development.

But I was disappointed. Adebowale Adefuye, the Nigerian ambassador to the United States, talked as though things were perfectly normal. “This happens in every country,” he dismissively replied when Bola, a Nigerian PhD student asked why despite government’s promise of containing it we’ve seen the insurgency rise.

After listening to Adefuye, I immediately realized one of the fundamental problems facing Nigeria – the tendency of politicians and their representatives to play politics with everything including the lives of the very people that had put them in the positions they occupy.

It doesn’t matter that Time Magazine named President Goodluck Jonathan as one of the most influential people in 2012, last year was Boko Haram’s year in Nigeria. In 2012 alone, the terrorist group killed over one thousand people through their gun and bomb attacks on churches, schools, police stations, media centers, markets and communication networks, making the year the group’s bloodiest.

To dismiss this as though nothing happened as Adefuye did in Harvard, is a disservice to the very people he claims to represent. Throughout the year, I carefully monitored reports on Boko Haram attacks in Nigeria, and there was no month that passed without at least three or four attacks on innocent citizens by the group. The average death toll a month in 2012 was 90.

I believe that Nigeria and Nigerians have had a handful. No nation allows such callous wastage of its people and expects to truly develop. The west listens to China and India today because these nations in the last two decades have demonstrated that they understand the power they have – their people both at home and in diaspora. Brazil, a country that recently overtook the United Kingdom as the world’s sixth largest economy, is another nation that understands the power of it numbers.

It is said that one out of every six Africans is a Nigerian, yet Nigerians grapple with such challenges as constant power supply that smaller countries like Togo, Ghana and even war-torn Ivory Coast have substantially put behind them. Nigeria remains a sleeping giant.

One year after the massacre in the Catholic Church in Madalla, we have in Nigeria a country more insecure, where Boko Haram has become insolently audacious and resolutely bold as to invade a military cantonment and a police base of the caliber of Jaji and Special Anti-Robbery Squad office.

One year after President Jonathan cried in Madalla, we see Boko Haram virtually shutdown schools in parts of the north; we see them bomb telecom facilities making the mobile phones in the hands of some in that part of the country of no use in an increasingly interconnected world.

To blame the Boko Haram onslaught on politicians who are unhappy with the “revolutions that President Jonathan is leading” as Ambassador Adefuye puts it, is to indirectly show the weakness of the president. I did an article earlier in 2012 calling on the President to be bold to name and shame those sponsoring Boko Haram after he stated that his government knows them. Ironically the only suspect that was arrested for allegedly masterminding of the Madalla massacre escaped from police detention.

One year after the Madalla tragedy that claimed the lives of over 40 Nigerians while injuring more than 50 others, fear pervades our land. Nobody knows where and when the next Boko Haram attack will occur. The politicians in the national assembly are as fearful as the ordinary man on the street of Abuja.

Even the president, with all the security apparatus around him, feels unsafe. For the second year in a roll, he has refused to hold the normal outdoor parades to mark our independence day for fear of possible attack, preferring rather to hold an indoor get-together with friends and allies in his more fortified Presidential Villa.

For Christians in the north, the region has become worse than the Biblical lion’s den.

The fatalities are more than most media counts indicate. In Borno, Kaduna and Kogi, not less than 70 churches were destroyed, according to one media account.

In a recent report, World Watch Monitor, a human rights group that monitors persecution of Christians across the world, describes Nigeria as “a country where the worst atrocities in terms of loss of life occur”.

A number of Christian corps members have been slaughtered in the north for things that no sane person would call offence. I remember the stories of Evelyn Tagbo and Christiana Oluwasesin, two graduates who served in Gombe state. Both taught at two different girls school but their stories are similar. One day Evelyn was going to invigilate a class. It was so sunny that she decided to walk her way to the class passing under a tree in the compound where unknown to her some Muslim students sometimes prayed. The students went after her and almost lynched her but for the timely intervention of the school principal.

Christiana Oluwasesin, a mother of two, who found herself in similar circumstance never lived to tell her story. She was invigilating a class when a student walked into the exam hall with her bag. Christiana collected the bag and threw it outside as exam rules didn’t permit students to take in their books. Immediately the student began to cry saying her Quran has been desecrated. Christiana never knew there was a Quran in the student’s bag, but before she could even explain that, the students have descended on her and with the help of fanatics from the village stripped her naked and stabbed her to death.

Evelyn today blogs about the activities of Boko Haram, calling for government action to root out extremism in schools and for better protection of corps members serving in the north. She remembers with nostalgia how she would have died for what she knew nothing about. How many corps members have died under similar circumstances? One year after the Madalla tragedy, we are less safe. I am only hoping that the worst days are behind us.