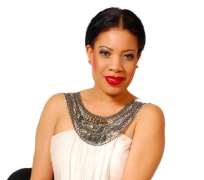 More and more Nigerian celebrities are starting the year 2013 on a good note. Funke Akindele started off the year with a multi-million naira deal with Jobberman, Terry G got a Range Rover Sport SUV for himself, while K-Solo spent over N7million on a new Jeep.

This time, it is Monalisa Chinda that is starting the new year with the launch of her own line of beauty products called M-Code.

While unveiling M-Code recently, she was reportedly quoted to have said, "We are starting with the body sprays for men and women, after which other beauty products from my M-Code stable will be introduced into the market.

"It is going to be a very busy year for me and my team. We have several activities and programmes for 2013, you just watch and see."

Another way to make more money apart from her Glo ambassadorial deal? Hmm, smart Port Harcourt babe that thinks like an Igbo man.

People Say Tonto Dikeh Was Responsible For My Illness-Biola Ige

A MUST READ! True Life Story by the Richest Man in Hollywood

PHOTO: Yvonne Nelson Search For Another Love After Dumped By Iyanya?

Mama G At Loggerheads With Ibinabo Fiberesima Over AGN Presidency