"Genevieve And I, No Smoke Without Fire"- D'banj Finally Confessed! 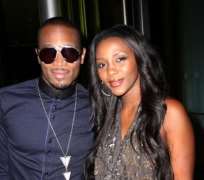 Koko Master or D'banj as Dapo Daniel Oyebanji is called has finally opened up on his relationship that made news headline months back with Nollywood star actress, Genevieve Nnaji to be real.

In an exclusive interview with one of the beautiful and very eloquent TV/On air personalities known as Toolz, D'banj said he quite had a relationship with the mother of one, Genny but it didn't work out.

"Genevieve was a friend, we're dating no more....on the relationship, yes, there is no smoke without fire....," he said

We Appreciate Your Sincere Patronage. Thank You All!

If they put me in anything that doesn't make me hot and sexy, they are in trouble”- Omotola Jolade

"Genevieve And I, No Smoke Without Fire"- D'banj Finally Confessed!