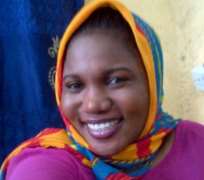 Another tragedy has just hit Nollywood, one of the finest actresses, Bisi Komolafe is said to have died yesterday night at UCH, Ibadan. the cause of her death according to report is that she had complications with her four months pregnancy which resulted to miscarriage.

It's indeed a black new year eve for the make-believe industry!
We shall update you full details soon. EXCLUSIVE : LOVE IS IN THE AIR IN NOLLYWOOD !!