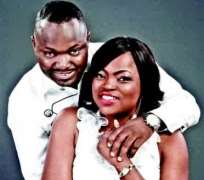 Going by report reaching Nollywoodgists.com, Fadekemi, the second wife of Almaroof Oloyede, who is the husband of top Nollywood actress, Funke Akindele, has been delivered of a baby boy.

Aproko247 reported that Fadekemi gave birth to the child some days ago and the father is over excited about the arrival of the new born baby to the family at this festive period. The mother and child were also reported to be in a stable condition.

Earlier in the year, it was reported by a popular Lagos soft-sell magazine, E247 that Almaroof was expecting a sixth child from Fadekemi, who was then reported to have been devastated by the news of her hubby planning to get married to Funke at that time.

She was reportedly advised to leave the country for Dubai or London in order to save herself from the trauma of seeing her husband getting married to another woman while she was still pregnant at that time.

A family source close to Almaroof told Nollywoodgists.com that the story is true and confirmed that the child was given birth to around November.