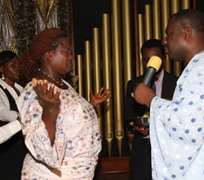 Act of God is a legal term for events outside of human control, such as sudden floods or other natural disasters, for which no one can be held responsible. The phrase “act of God”, is sometimes used to attribute an event to divine intervention. Often it is used in conjunction with a natural disaster or tragic event. A miracle, by contrast, is often considered a fortuitous event attributed to divine intervention. Some consider it separate from acts of nature and being related to fate or destiny. Christian theologians differ on their views and interpretations of scripture. R.C. Sproul implies that God causes a disaster when he speaks of Divine Providence: “In a universe governed by God, there are no chance events”. Others indicate that God may allow a tragedy to occur. Others accept unfortunate events as part of life and reference Matthew 5:45 (KJV): “for he maketh his sun to rise on the evil and on the good, and sendeth rain on the just and on the unjust.” Do you know Apostle Prince David Zilly Aggrey? Apostle David Zilly Aggrey is the General Overseer, Royal House of Grace International Church, Port Harcourt. He is also the double Chairman, Rivers State Christian Association of Nigeria and Pentecostal Fellowship of Nigeria.

“Come and see what God has done, how awesome his works in man’s behalf! He turned the sea into dry land, they passed through the waters on foot—come, let us rejoice in him. He rules forever by his power, his eyes watch the nations—let not the rebellious rise up against him.” Psalm 66:5–7 (New International Version). What is the most amazing thing you ever saw? Was what you saw a real event or was it made to look real? Magicians can perform unbelievable tricks. But they are just that “tricks”. When I was a child traveling shows would come to town and set up everything from a circus, magic shows, or even a man that could do unbelievable things with whips and ropes. Today the same things would seem crude and would not impress most people. With television, movies and computers almost anything can be depicted as real. People see so many things that they have become anesthetized to an amazing or awesome event. In the above text the psalmist invites us to see the awesome miracles God has performed and for us to rejoice in Him. In trying to think of a way to explain the great miracles to you I asked my wife how do I explain creation, the parting of the Red Sea, the crossing of the Jordon River, or raising Jesus from the dead. She said, “You have a problem because most people think all the miracles and the fulfillment of the prophecies of Jesus are just fairy tales. Parents are not teaching children that they are true; most of the media and people don’t believe they are real. So the miracles are presented as myths.”

You must believe God created this world out of nothing. That he spoke it into existence. David and Goliath are told just as it happened. The crossing of the Jordan was a miracle stopping of the flow so that they could cross on dry ground. The parting of the Red Sea so that they could escape Egypt happened just as described in the Bible. The walls of water on each side may have been a half-mile high and the ground was dry so that one and one-half million people could cross. You must believe that God raised Jesus from the dead. Luke in Acts 13:32-35 calls Jesus resurrection at fact. ““We tell you the good news: What God promised our fathers he has fulfilled for us, their children, by raising up Jesus. As it is written in the second Psalm: “‘You are my Son; today I have become your Father. The fact that God raised him from the dead, never to decay, is stated in these words: “ ‘I will give you the holy and sure blessings promised to David.’ So it is stated elsewhere: “ ‘You will not let your Holy One see decay.’”

The witnesses of a miracle knew they were real. Read the story of Simon the Sorcerer as recorded in Acts 8:9-24. “Now for some time a man named Simon had practiced sorcery in the city and amazed all the people of Samaria. He boasted that he was someone great, and all the people, both high and low, gave him their attention and exclaimed, “This man is the divine power known as the Great Power.” They followed him because he had amazed them for a long time with his magic. But when they believed Philip as he preached the good news of the kingdom of God and the name of Jesus Christ, they were baptized, both men and women. Simon himself believed and was baptized. And he followed Philip everywhere, astonished by the great signs and miracles he saw. When the apostles in Jerusalem heard that Samaria had accepted the word of God, they sent Peter and John to them. When they arrived, they prayed for them that they might receive the Holy Spirit, because the Holy Spirit had not yet come upon any of them; they had simply been baptized into the name of the Lord Jesus.

Then Peter and John placed their hands on them, and they received the Holy Spirit. When Simon saw that the Spirit was given at the laying on of the apostles’ hands, he offered them money and said, “Give me also this ability so that everyone on whom I lay my hands may receive the Holy Spirit.” Peter answered: “May your money perish with you, because you thought you could buy the gift of God with money! You have no part or share in this ministry, because your heart is not right before God. Repent of this wickedness and pray to the Lord. Perhaps he will forgive you for having such a thought in your heart. For I see that you are full of bitterness and captive to sin.” Then Simon answered, “Pray to the Lord for me so that nothing you have said may happen to me.”” If you are having trouble believing in the One True God and his awesome power spend more time in your Bible. Read some good books on Christian evidences.

“The Amazing Acts of God” is a series of features emanating from encounter with God’s power and eye witness experiences through the Ministry of God’s Servant, Apostle David Zilly Aggrey on 11th November 2012 when I worshipped at Royal House of Grace International Church, Port Harcourt. At this service, in particular the servant of God Apostle Zilly Aggrey came in to Minister the Word but the presence of God that came in with Him to the altar enveloped the entire congregation with cloud of glory – shekinah glory, the awesome presence of God such that there were outstanding supernatural manifestations and interventions to meet the needs of worshippers. The resulting miracles, signs and wonders were just too much – the acts of God’s grace at work in the Ministry of the Prince of Preachers – Apostle David Zilly Aggrey.

It was at this service that God spoke to me to record and publish these amazing miracles and acts of God that the world may know God is still working miracles in lives of people who put their trust in Him. That God still uses His servants all over the world to do miracles. Why l ask? God told me my servant Apostle Zilly Aggrey does not advertise miracles as He would want for other to come and experience the grace of God at work in Royal House of Grace International Church. Apostle Zilly Aggrey recently in a press interview confirmed that he does not advertise miracles. The publishing of the acts of God that is being serialized will not only make you a believer but miracle working believer by the power of the Holy Spirit. In subsequent series these amazing acts will be chronicled with detailed testimonies that are truly amazing. Have question you may call: 08033399821 or write . Stay and blessed.