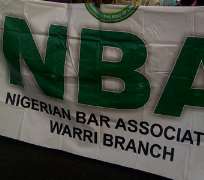 SAN FRANCISCO, December 20, (THEWILL) – The Warri, Delta State branch of the Nigerian Bar Association (NBA), Thursday, washed its hands off all kidnapping-related cases in the courts across the state.

The association specifically distanced itself from the case involving the National Coordinator of Human Right Defender Organisation of Nigeria (HURDON), Casely Omon-Irabor, who is under police investigation for kidnapping-related offences in the state.

The association said its decision taken after a brief meeting held today was in reaction to the spate of kidnapping and abduction which is on the rise in the state with judicial officers also becoming targets and victims.

In a statement jointly signed by the Chairman and Publicity Secretary, Barrister Ben Oji and S.G Ediagbonuwie respectively, the association hinged its decision on the arrest of Omon-Irabor over alleged kidnapping-related case.

The association noted that Omon-Irabor and another person were arrested by the police on December 13, and arraigned the next day before a Warri Magistrate Court.

It said that on the Count I charge, it was alleged that Omon-Irabor and one Patience Akpokona had, on December 13 at Ugbuwangueqqzaa Police quarters, Warri, conspired to commit perversion of the cause of justice.

NBA also alleged that the duo offered the sum of N700,000 to one Inspector Samuel Imana to induce him to release one Vincent Akpokona, a kidnap suspect.

According to the statement, the two suspects were accused of attempting to assist one Vincent Akpokona, a kidnap suspect to escape punishment contrary to Section 10 and punishable under Section 519 of the Criminal Code.

According to the association, the offences allegedly committed border on the offence of kidnapping which falls within the purview of offences for which the NBA, Warri branch, resolved not to render legal representation.

"We do not have any reason from our firm resolution. Any member of the branch, who provides legal representation in this case, would be in clear breach of the subsisting resolution of the branch," the association empathically said in the statement.

It however maintained that the charges against Omon-Irabor were allegations , saying "our stand does not, in any way, infer an acceptance of their veracity."

According to the association,"We would expect the police, having charged the matter to court, to prove the said allegations in accordance with the provisions of the law," adding " We shall follow the proceedings with keen interest."

It would be recalled that Omon-Irabor had recently regained his freedom via a bail bond reportedly secured by the NBA Warri chapter.